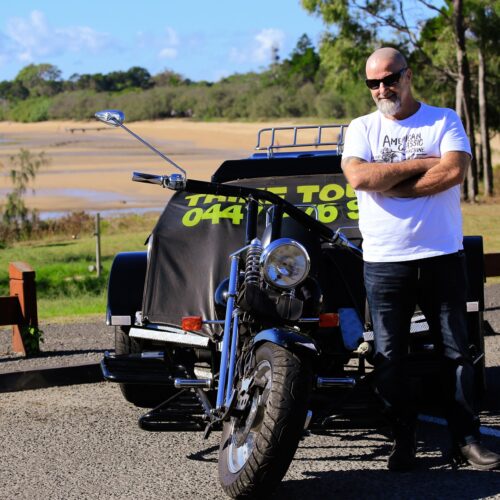 Glenn Rhino Chapman or Rhino – as he is known to many, has been the owner/operator of Rhino Trike Tours for the past twelve years. If you live in Hervey Bay chances are that you would have heard the throb of the 2160 motor as he cruises the nard on his OZ Trike. With various tours on offer, there is something to suit all abilities and a broad range of ages. He also acts as tour guide and pulls over to point out landmarks and other points of interest as well as wildlife along the way.

Due to the Coronavirus, like many businesses – Glenn had to shut down during the months of lockdown. He hopes that everyone uses common sense and does their bit to keep the virus under control so as everything can get back to normal for the remainder of the year.

Glenn says, “I find it rewarding to see people smile, they get excited when I turn up with the bike. For the older generation, the experience brings back memories while giving them a chance to relive their youth”.

Kids of all abilities love going on a tour too, seeing them out and about and experiencing the great outdoors makes it all worth it.

Life hasn’t always been plain sailing for Glenn, especially on the health front, he has had major operations on his knee and hip. Mobility problems saw him reach 158kg within a few years. This put a lot of stress on his joints.

“I was very depressed during this period but was able to pull myself out of it after deciding to have gastric bypass”, said Glenn.

After months of research and talking to people that had had the same operation, he knew that it was now or never, so Glenn packed his bags and headed to India to have the procedure. After two weeks of recovery, he flew home but was involved in an horrific car accident on the way back to Hervey Bay – he was lucky to survive but it took many months to recover.

Once recovered Glenn started exercising to get the weight off. Now thirteen months later he has lost a staggering 68kg’s but says that the journey has not been easy. Finally, there is light at the end of the tunnel, Glenn is able to feel good about himself for the first time in ages. Now down to 91kg he is the healthiest that he has been in years and is loving it.