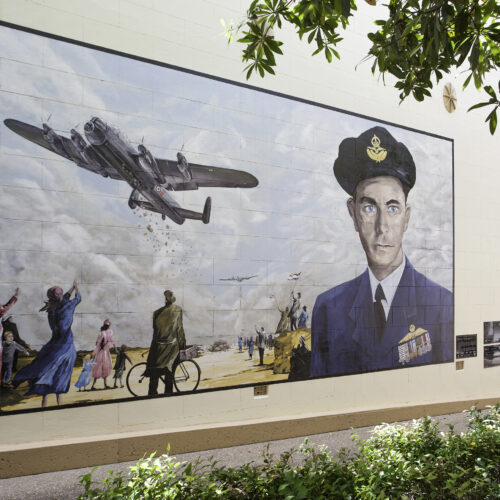 Councillor Paul Truscott said the changes were approved following a four-week public consultation period in which 41 submissions were received including recommendations for alternative names supported by historical data.

“The proposal to name the airport’s main access road came from the Maryborough Military Aviation Museum committee, which has leased some airport land from Council,” Cr Truscott said.

“The access road didn’t really have a name which made it difficult for some of the places in the precinct, such as the Maryborough Aviation Services, to get services.

“For example, when they contacted communications companies such as Telstra and Australia Post, they were asked for an address, but there wasn’t one.

“So giving the roads names should help identify spots throughout the airport precinct.”

Cr Truscott said Frank Lawrence was born and bred in Maryborough and was chosen for the main circuit, but Council still wanted to pay tribute to Clifton Cornall so chose his name for the Hangar North Road.

“There were a lot of other names that were also suitable candidates but with this decision we are honouring two military aviators and giving more of the entire site some identity,” he said.

Cr Truscott said the Maryborough Military Aviation Museum committee was progressing well with its plans for the development of its site and was excited about the museum being another feature in the Fraser Coast Military Trail.

Born in Maryborough on 22 March 1919, Frank Lawrence enlisted in the army for compulsory training in the 47th Infantry Battalion.

Lawrence applied to join the RAAF and was called up in mid-1941. He received his wings after training in Tiger Moth and Anson aircraft at Bundaberg.

After arrival in England, Frank had a few months of training in Airspeed Oxfords, Wellingtons and Lancasters. He was posted to 460 RAA Squadron on 15 March 1943, with his first tour including 17 trips in a row to the Ruhr.

At the end of the war Lawrence was involved in Operation Manna (described by himself as his proudest moment), which provided food drops to the starving people of Holland.

Lawrence was awarded the Distinguished Flying Medal for his exploits in the air.

He returned to Australia, marrying his WAAF fiancé and taking up his previous civilian job in a Maryborough hardware store.

Clifton Cornall was born in England in 1918 and came to Australia with his family. He enlisted with the RAAF and was sent to Africa to fly with the RAF 250 Squadron.

In October 1941, he was left with extensive leg injuries when his P40 Kittyhawk Aircraft crashed after a bomb exploded under the cockpit.

Cornall was stationed in Parkes, then Maryborough for general flying duties. He arrived in Maryborough on the 11 January 1944.

The next day, Cornall was involved in an aeroplane crash with Wireless Operator LAC Clive Frederick Wood on board.

The aeroplane crashed at the airport due to engine failure leaving Wood badly injured and killing Cornall. Cornall is buried in the Maryborough War Cemetery.

The Maryborough Military Aviation Museum believes the name change is a fitting tribute to a young man who lost his life in Maryborough during World War II, aged 24 years.