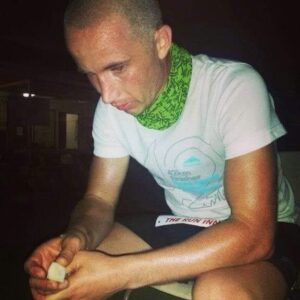 This is not how he wanted it to end. At 3am on a dirt track, Andrew Dower had fallen to the ground for the last time. Three times earlier in the night he had collapsed but managed to find the strength to keep going. The fourth was different. He was physically, emotionally and mentally drained. He had nothing left to give. As he lay there with his face in the mud he felt completely broken. This was not part of his plan. This is not how he thought it would end.

In September 2014 Andrew had set off to compete in the Glasshouse 100-mile ultramarathon. He was physically fit and mentally strong. What he would soon learn is that mental strength and mental preparation are two very different things. It would be the difference between him finishing the race and lying face down in mud with no strength to continue.

Andrew was 130 kilometres into the Glasshouse 100-mile ultramarathon and had been running for over 20 hours. With another 30 kilometres to run, he lay on the track and asked himself “why am I doing this”? He searched for a reason to stand up and keep going but he could not find one. It would take the intervention of a medical team to withdraw him from the race. Andrew reflected on that moment, “I thought my preparation was perfect, but I learnt the hard way that I was missing something. A reason why. Something to get me to the finish line”.

What made this ‘did not finish’ result even harder for Andrew to come to terms with was why he first decided to race. For many years Andrew had been battling with depression and anxiety. After immersing himself in sport, he had started to turn things around, “I was winning my battle with depression and saw the finish line of this 100-mile race as my celebration”.

At the time Andrew didn’t realise the importance he had placed on the race and found himself spiralling back into depression very quickly. “I plunged into the worst days, weeks and months of my life. I found myself completely overwhelmed”. His life was now reflecting that moment of the race where he fell to the ground, but now it was more serious; he was trying to find a reason to live. “I had to admit to my wife that suicide had taken over my thoughts”.

In his first 100-mile attempt Andrew mistakenly thought he could do it on his own. That mindset would cost him finishing the race. He didn’t make that mistake in his fight against depression and decided to seek support from his family, friends and a psychologist whom he would grow to trust and respect.  With time and support Andrew grew stronger.

When he was strong enough, he decided to try the 100-mile race again. “I made the decision exactly one year out from the race and I spent that entire year doing everything I could to mentally prepare myself. Visualisation, reading books on mental toughness and immersing myself in the concept of pushing beyond the limits”. Importantly, Andrew built a support crew that would help him leading up to the race and running the race.

At 11:06am on 10 September 2017, after 28 hours of torture, Andrew Dower crossed the finish line of the Glasshouse 100-mile ultramarathon. The difference for Andrew was his support. “Reaching the finish line was a journey that started a long time ago and from the beginning challenged me and stretched my comfort zone. With that said, like in anything, I could not have done it alone”.

There is no race that better reflects the journey of a person battling depression than the ultramarathon. In life, when you are lying face down in the mud with no strength to continue, it helps to know that there are people who care and want to see you finish the race. Because life is not a self-help book.