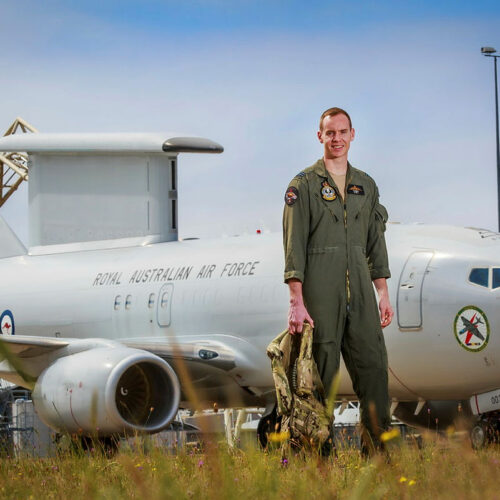 For a good part of August, the sky above us was filled with the rumble of a Royal Australian Air Force (RAAF) E-7A Wedgetail from No. 2 Squadron based at RAAF Base Williamtown. The aircraft caused a stir within the community and also generated much excitement. Residents and visitors took videos and photos, then sent them through to What’s On Fraser Coast.

A friend of mine, Karen Stillman, sent in the first photo of the aircraft, this was put on our Facebook page – What’s On Fraser Coast. The image went viral, and at the time of writing, had reached well over 12,000 people.

It was at that point that all eyes turned to the sky.

I decided to find out a little more about the aircraft, the mission, and the people that fly this spectacular plane.

Thank you to the ADF for letting me chat with Flight Lieutenant Ryan Anderson from No. 2 Squadron, who was one of the pilots who captained a mission above Hervey Bay and knows firsthand everything there is to know about the Wedgetail and its capabilities.

Tell me a little about your background, how long have you been in the Air Force, and where you are based?

I grew up on the Sunshine Coast and joined the Air Force in 2012. After three years at the Australian Defence Force Academy, I graduated with a Bachelor of Technology Degree. In 2015 I began a pilot’s course. After receiving my wings, I was then posted to 2 Squadron based at RAAF Base Williamtown near Newcastle. What followed was a conversion course in preparation to fly the Wedgetail. In 2018 I got my captaincy for the aircraft and later that year was awarded an International Captaincy. I have been operating on the Wedgetail for just over four years.

What does your role entail?

On the Wedgetail we can have up to ten mission crew, everyone has an important role to play. As a pilot on the Wedgetail, my primary function is to accurately position the aircraft to optimise the sensors onboard to ensure that the data that is being collected is valid. The data is then transferred to all of the aircraft airborne in the theatre of operation at the time. What we do helps significantly to increase both the situational and the battle awareness as we can see what is coming and are able to relay that information on.

Have you done any overseas missions?

To be awarded international captaincy you have to do an international exercise. Last year I took the Wedgetail to Las Vegas and attended Exercise Red Flag held at Nellis Air Force Base in Nevada.

On arrival back to Base, I found out that I was going to be deployed as part of the Australian efforts, to the United Arab Emirates as the aircraft captain for rotation 16 of Operation Okra. The airborne mission took place in the airspace above the Middle East Region.

Tell us a little about the E-7A Wedgetail aircraft and how it performs?

The E-7A Wedgetail provides Australia with one of the most advanced air battlespace management capabilities in the world.

Currently, we have 6 Wedgetails on hand, which is a great asset for Australia. The Wedgetail is manufactured by Boeing and has a wingspan of 34.3 m.

This particular aircraft is used for controlling the airspace; sometimes you may have 30 to 40 aircraft that you need to check-in and position.

What was the mission recently over Hervey Bay/the Fraser Coast?

The purpose of the mission scenario was to test the skills of RAAF E-7A pilots in approaches within designated training airspace.

Hervey Bay is a Class G air zone this means that there is no air traffic control, so it is in an uncontrolled airspace environment, this allows us to practise our separation standards, (the distance between two planes). It is about pilots talking to pilots through a common terminal area frequency.

In other larger areas, this is done by air traffic controllers, so this is great practise for us.

Is there anything else that you would like the people of the Fraser Coast to know about the mission that took place above our heads?

Now and again over the next few years, you can probably expect to see a Wedgetail fly into Hervey Bay as it is an excellent place for training.

It is also a beautiful region of Australia. Last year I was conducting a similar exercise and saw some whales below it was a beautiful sight.

What’s On Fraser Coast would like to thank the RAAF for taking the amazing photos for us!

Please note – All flying activity is conducted within strict guidelines. Noise management and environmental impact are vital considerations in the planning and conduct of any military activity.

Air Force appreciates the support it receives from the wider community.