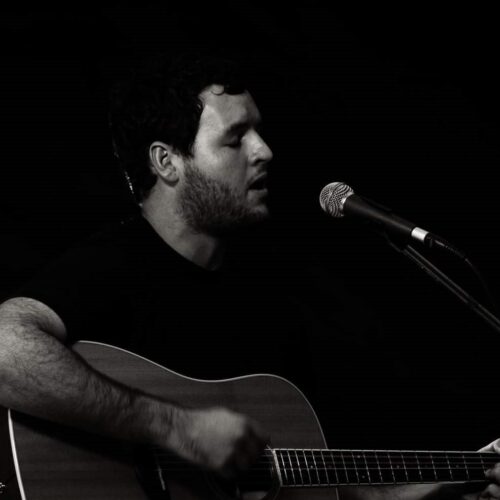 Tell us a little about your background?

I am 29 years old, and I was born and raised here in Hervey Bay. Growing up, I lived with my mum and dad and my two older brothers. My mum and older brother Brett – who plays bass in my band, ‘Trainwrecks’, both played guitar and helped me learn to play as well.

How difficult is it to learn to play the guitar?

I learned the basics from my brother, but apart from that, I was largely self-taught. I took as many music classes as I could in high school and had some great teachers who helped as well.

What is it that you enjoy the most about performing?

I really enjoy playing music that I like and music that the crowd wants. I like learning new songs with the band and by myself when I play solo. It’s always a lot of fun playing something new for a crowd.

Tell us a little about The Trainwrecks?

We are a 3-piece rock band. All of the members live in Hervey Bay, and we play songs from a variety of artists, predominantly from the ’90s and early 2000s.

The band consists of Dan Jarratt on the drums and Vocals, Brett Westlake on the bass guitar, and myself on guitar and vocals. We have all been playing music together for a long time. We were all also previous members of the local band Arcade Vandals for several years.

As a solo artist, how does your music differ from that of the band?

As a solo artist, I play more on the acoustic guitar, and my sets consist of a wider variety of artists and genres. I play a lot more songs by artists that influence me while also keeping the crowd entertained with songs that they will know as well.

What music/artist inspires you at the moment and why?

My biggest musical influence is Butch Walker. He is an American singer/songwriter and producer. I was privileged enough to see him live in concert last year and he was amazing. Lately, I have been listening to a lot of Blue October, Ben Platt, The Menzingers and Birds of Tokyo. I’m always looking for new music to inspire me.

Do you write any original music?

I do write and record my own original music as well as cover songs. I have a single on Spotify, I am also working on writing and recording songs for an original EP/Solo album in the near future, and Trainwrecks will hopefully release some music soon as well.

What else would you like the people of the Fraser Coast to know about you?

I share cover songs once a week on my Facebook page and YouTube channel which are both titled “Aaron Westlake Music” and I have an original song called: No More Lying (Until The Sun Comes Up) streaming on Spotify.