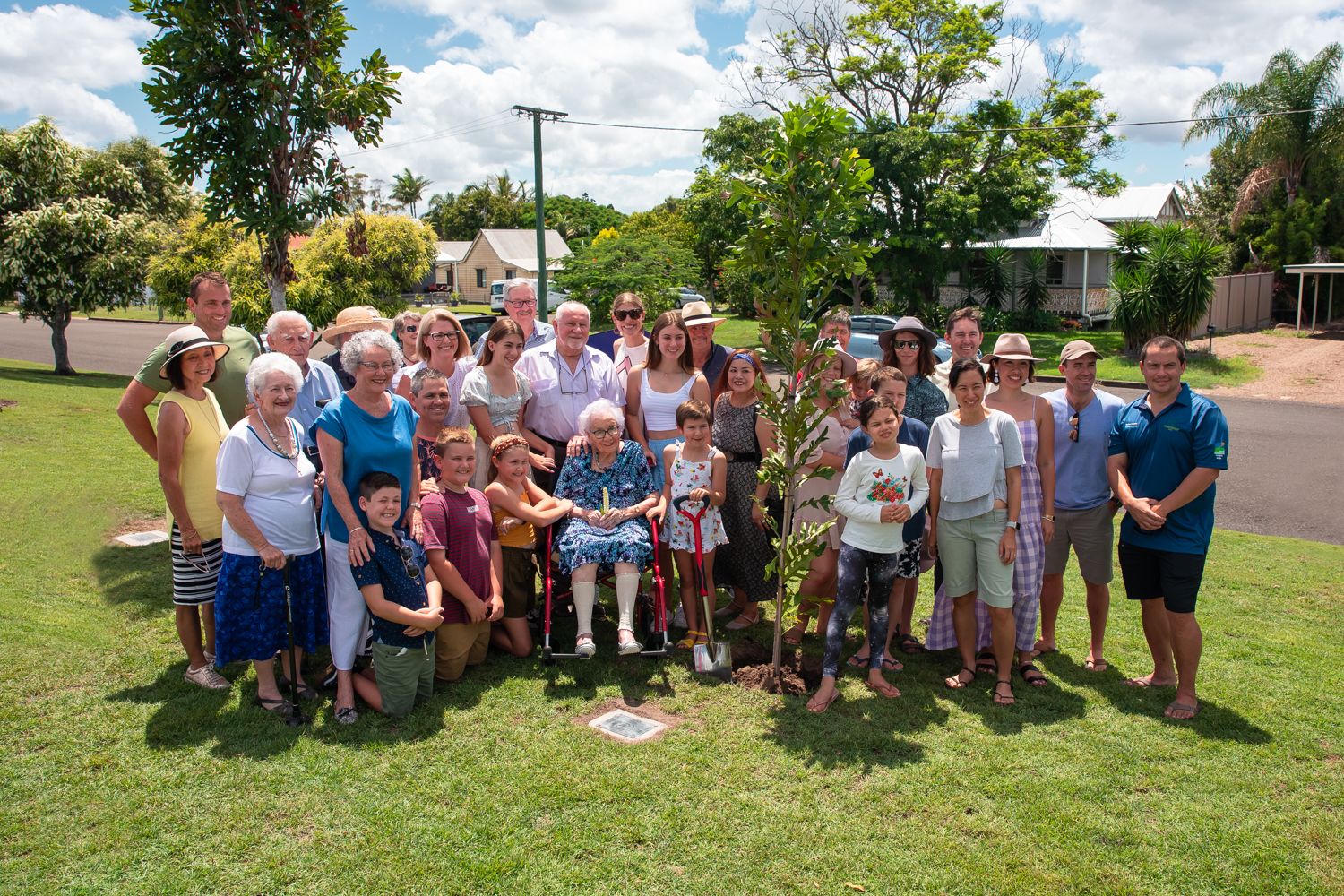 Maryborough’s own Professor of Ikebana, Mildred Goldsmith, was honoured at the Elizabeth Park Rose Gardens today (Friday, January 15) with the planting of a tree to mark her 100th birthday.

Fraser Coast Mayor George Seymour said it was fitting that a tree would represent the milestone for Mrs Goldsmith who had dedicated almost 60 years to the Japanese art of arranging flowers.

“Mildred is currently honoured as a Professor of Ikebana and she has achieved the highest awards possible in the art,” Cr Seymour said.

“After learning from Ikebana expert Norman Sparnon in the 1960s, Mildred started teaching others in 1970 and travelled between Cairns and Buderim over many years sharing her knowledge.”

Mrs Goldsmith, who is featured on Fraser Coast Library’s Oral History: Having a Voice series on YouTube, was not expected to live long after her birth on January 16, 1921.

“Mother and father came (into town) by sulky from Five Mile on a stormy night and a doctor delivered us. We were twins, which was a shock to everyone,” she said.

The doctor declared there was “no hope at all” for her, but she has lived for 100 years.

Mrs Goldsmith said the most significant moment of her life was marrying Desmond Goldsmith in 1943 at St John’s Cathedral in Brisbane.

“Des had just returned from two years overseas. What a big surprise one day when I was travelling to the Queensland Book Depot where I worked.

“I looked down and there was my husband-to-be getting in a taxi going out to where I lived. I had not seen him for two years and three months. It was wartime, and his return was a secret.”

After they married, Mr Goldsmith served in New Guinea for about a year. Upon his return, they moved back to Maryborough and rented a home in Tooley Street where they raised their family.

Mrs Goldsmith’s story can be seen on Fraser Coast Library’s Oral History: Having a Voice series on YouTube. She remembers the way things were in her childhood and brings us through her life to her current honours as a Professor of Ikebana.

Another tree planting ceremony will be held to honour Laurel Stilgoe in Maryborough on January 18. On January 5, a tree was planted at the Hervey Bay Botanic Gardens to honour Ivy Boxall’s 100th birthday.

If you know someone turning 100 years of age and would like a tree to be planted in their honour, complete the Anniversary Message Request Form from State Member Bruce Saunders (Maryborough), Adrian Tantari (Hervey Bay), Federal Member Keith Pitt (Hinkler) or Llew O’Brien (Wide Bay).

Completing this form will also initiate a letter from Queen Elizabeth II.