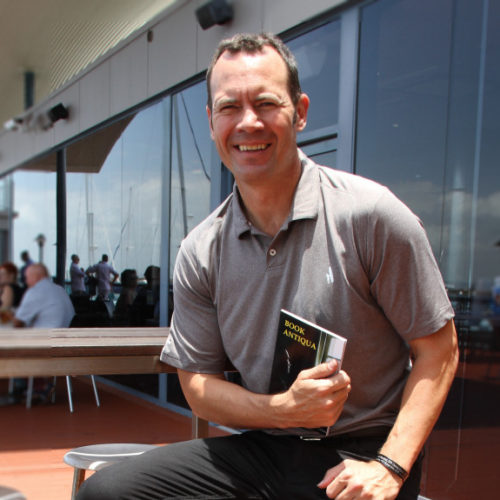 Rupert McCall, inspires and ignites with his tributes and words.

Sitting down with Poet, Rupert McCall I can’t help but feel a little in awe. I have followed and listened to his tributes over the years and remember feeling many emotions at those sometimes poignant times that he writes about. As I meet him he looks at you warmly, straight in the eye he has a firm handshake, and a smile to light even the darkest place.

Rupert comes across as confident, witty, humble, and he has a huge vocabulary of words set to entice, bring you to tears, or make you laugh. All of this he achieved as the Special Guest Speaker at the Hervey Bay Chamber of Commerce Long Lunch, held at Kingfisher Bay Resort.

When writing about our conversation, I was unsure on how to deliver it in a meaningful way. But of course Rupert is the only one that can do that so our conversation is in his words, as those that have read his work know that the man himself is a true Modern Day Poet and writer of words.

So I was there, I remember standing just off-stage and it was really cold, as cold as I have ever been, and no amount of layers of clothing could protect you from the wind that was coming of the Aegean Sea and cutting through everything. I was really nervous there was 20,000 people there, it was not only my biggest stage but easily my biggest audience.

So everything goes through your mind, What if I forget something!. What if my words get all tangled up!, because you know that this can happen. And so I am standing there, I must have been just about turning blue because my teeth were chattering and somebody asked me if I wanted to borrow their scarf and I went to say yes but I couldn’t speak as I was that cold and tense so I thought if I can’t say a word, how will I recite five paragraphs of poetry.

In that moment I had one of those great epitome moments, it was all about perspective. I thought about what I was going to pay tribute to, and the fact that I was pretty much standing on the spot where young aussie anzac kids, as that is what they were, just kids, Jumping out of boats in the freezing cold water and then not only having to deal with cold but people trying to kill them, somehow clawing their way up the beach. So I thought I don’t really need to be nervous because I am only reciting a poem. That warmed my blood and all of a sudden the adrenaline kicked in and I stood up and everything went smoothly after that”.
I read that you have written six anthologies of verse. Which one took the longest to write and why?
“The one that took the longest was my last ‘Book Antiqua’. I had written five anthologies year after year, 93,94,96,97 and 2000, then 2013. In that decade I had four children, and inherited another mortgage we also renovated our house, then throw a mid life crisis into the mix. This book pays tribute to those times and events in my life. There is a darkness In the book that had to be honest, it had to tell the truth about the challenges I faced during this period of my life”.
Which role are you most comfortable in, Poet, Guest Speaker, Writer or Media Presenter?
“I started writing poetry in grade six, I feel very comfortable within that space as it was very natural to me. Reciting and performing not so much I had to really work hard at taking that stage and owning it, and then I guess entertaining an audience. That didn’t come naturally to be, I was always a little bit shy as a kid.

The media presenting and the Emceeing was hard work to actually be good at it. Once you get through those early chapters and you are a little bit more comfortable in front of a camera or Emceeing, and doing the corporate function thing you start to enjoy it”.

In late 2013 you performed a tribute to Roger Federer and Rod Laver just before the 2014 Brisbane International. What was it like standing in front of your subjects, with a roomful of people who shape the tennis world listening in?
“I paid tribute to Roger Federer, and Rod Laver and I inherited a fan on Australian soil named Darren Cahill who played tennis and played it very well for Australia but more importantly he coached Andre Agassi and he coached Andre when he was number 1 they are very close friends so unbeknownst to me he was sending clips of my work but especially the Federer tribute to Andre in America.

So I got a call from a Corporate Tennis Organisation telling me about their special event. First of all they asked if I could write something for their event, and told me that a mutual friend had put my name forward, Andre Agassi which I had no idea about, so when I picked myself up of the floor and composed myself I agreed that I should really embark on this opportunity.

It was so well received, when I landed in their environment they hadn’t seen or heard anything like it so I made this big impact and not only Andre and some great tennis personalities were in the room, but the corporate network in this group included Bill Gates. So here was this kid who not too long ago was collecting Aluminium Cans on the Hill at Dolphin Oval in Redcliffe, trying to earn a little bit of pocket money standing on a stage reciting poetry to Andre Agassi, Bill Gates as well as quite a few other people.

I paid tribute to their Rivalry their nicknames their characters everything that was the fabric of their tennis family, and it couldn’t have gone any better. Andre gave me a big hug, cause he had sort of put his arse on the line to a certain degree, by saying you gotta get this guy that no one really knew.

I was kinda blessed with this opportunity to write something and present it with him in the audience. Nothing about that night that experience let me down in terms of Roger Federer’s humility and his character.

Originally the brief was ‘tribute to Roger Federer’, and that was going to be another daunting prospect because I knew that I had to be one hundred percent, spot on the mark. But then maybe a few weeks later, when I had already started to think about writing, they said hey listen we have Rod Laver as well and the same function the same occasion in the room. So this is tough because these are two of the greatest tennis players, if not the greatest players ever and now I’ve got to incorporate another legend into the tribute and make it equal.

Then I came up with the concept of this ‘Match Made In Heaven’ between Federer and Laver because of course they respect each other so much and their humility was their common denominator. So even though it was daunting, that adjustment felt like wow, this was meant to be , and it was a much better poem because it is Federer and Laver and these guys play each other you know in our wild imagination”.

Who do you use as a sounding board for your Poetry, and do you ever feel self doubt?
“My Wife Kate is definitely my sounding board when I feel that I need one. I have self doubt absolutely every time, it is almost part of the equation. I have this pre recital moment of doubt that says this isn’t good enough, I don’t think I’ve really got it right. I can remember those moments the Fire-fighter’s Dream, Federer, Laver, They are big stages so yes that is quite inherent in my personality being a perfectionist”.

Who has inspired you throughout your life?
“I was inspired by mostly Banjo Paterson with his poetry throughout the years, but Bob Dylan has always kind of accompanied me on this ride as well with his stories and great lyrics”.

In 2011 you recited your poem, ‘A Fire-fighters Dream at Ground Zero for the FDNY, on the 10th Anniversary of 9/11. How did this affect you?
“I remember doing a mental rehearsal that afternoon , I had just met a family who had lost their husband their brother and their father in 9/11 and I hadn’t had much sleep, all the ceremonies had taken place that morning.

My recital was at dusk at Ground Zero for the FDNY, there were Bagpipes it was very stirring but when I embarked on that rehearsal just in my own mind I started crying, everything that had happened was swirling around me so again I had that moment of great concern thinking, well I have to hold it together.

When I am asked to take that stage, you go into a zone, maybe a sports person feels it when they have done all the hard yards and they have practised and they have this gift to offer the world, it is like you go into this automatic pilot zone where your body your heart and your soul knows what to do. We all remember where we were every one of us then we witnessed it in real time and watched it unfold it was like the first time in history that something like that had happened”.

If you ruled Australia for the day what positive changes would you make?
“I think we should all have a public holiday on Melbourne Cup not just the Vics, lets do it across the board That was just the first thing I could think of, I am sure that I could do a lot more but this is a good start”.

What do you think makes you such a great Guest Speaker, or MC?
“If there is one thing that I have come to realise over the years, and maybe the law training helped, I think that I am good at summing up a situation putting the irrelevant stuff to the side. And cutting across the surface and getting to the heart and soul of the matter”.