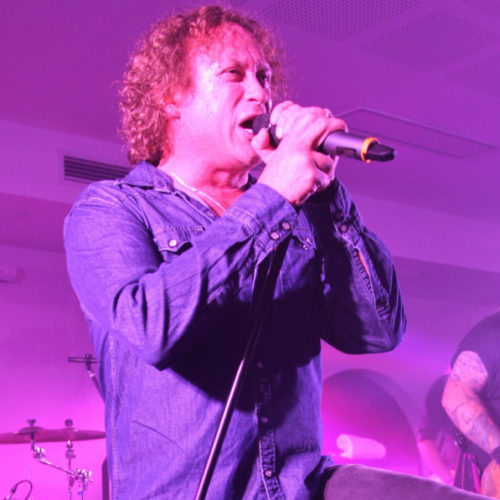 Australian rock band The Screaming Jets were formed in 1989 in Newcastle by three high school friends.  The current line up consists of Guitarists Scott Kingsman and Jimi Hocking, Bass Guitar Paul Woseen, Drums Mickl Sayers and of course Vocalist Dave Gleeson.  The Screaming Jets have had a string of Albums and hits.

Dave Gleeson and Bass Guitarist, Paul Woseen are the only two original band members to  still be with The Screaming Jets.

Ahead of their Concert in Hervey Bay I sat down with Dave Gleeson at the Beach House Hotel  and over a beer we had a chat. Dave says it how it is, with his unruly mop of curly hair, his boyish grin and an infectious laugh. He fills the room with his personality.

If there was one question that you wish Reporters would ask, what would it be?

“Well, few people would know that I live on a 10 Acre Farm in Adelaide. We keep sheep so as they can eat the grass. I love my tools and have a vast array. I also have two dogs one is a Kelpie, the other is a Foxy Cross that we call Bear. I love nothing more than coming home after touring and spending time with my wife and children and being a husband and a dad”.

What do you prefer, song writing or performing?

“They are both such different roles and I enjoy both immensely. I always think of a paraphrase  of Brian Fanning’s he says ‘When you walk into the studio nothing exists, there is no song no music just an idea. Then you create a song from nothing right in that studio, it is truly magical’.

“Performing is where the magic happens. When you are up there on stage and all of these people have spent money on tickets to see you perform you have a responsibility to put on the best damn show imaginable. When you have people yelling and screaming your name, it feels pretty good”.

What is your favourite band of all time, other than your own?

“ Definitely ACDC, I remember Bon Scott’s first time in America and the song ‘Dirty Deeds’. That song kept us going on the Tour Bus so many times, when we went to perform and the crowd was small, when we were tired, or out of sorts there was always ‘Dirty Deeds’ blaring out at us. It got us through lots of tough times. I even have a Bon Scott tattoo!.”

In the current line up who do you get along with the most?

“ Well, our current lineup has now been together for about eight years. That is a bit of a record for us, we are really all best mates. If we weren’t there would be no point in doing what we do. I am reminded of an Eagles concert from 1980, there was footage of Glyn Fry on stage just before the band broke up, Glyn said, ‘ We are three more songs away till I kick your ass Pal’. “ Once feelings are like that you should not stay together any longer. Once you don’t enjoy work any-more it is time to quit”.

Were you ever nervous interviewing legends on your radio show, ‘Rock of Ages?

“ Interviewing Barnsey made me the most nervous. I have known him for years and we are friends, so it was funny asking him questions as an Interviewer. I have also interviewed Don McLean and Meatloaf to name a few”.

How many times have you performed on the Fraser Coast?

“ The Screaming Jets have been touring for over 27 years. I think we first came to the Fraser Coast in 1991, I have family here so love visiting. There is no Rock School, music is magic when you are on stage. It is not like reality tv shows you see every day like Australian Idol. It is not about the rehearsals, the hair the costumes, the props. Watching the process in all of that takes away the magic, and makes people lose interest. Performing is not about having someone dictate your every move, but about having the freedom to express yourself in any way you choose. To me, Mystique is very important”.

What are the major differences between the Angels and the Screaming Jets?

“ Doc is an Icon, at first I was a bit wary as I did not know whether the fans of the Angels would accept me when I first became the lead singer. With the Angels I am more of a sub-contractor as well so I am not as free with my speech. Whereas with the Screaming Jets I am one of the bosses so I can say whatever I feel like at the time. The Screaming Jets has always been my baby, and I am a lot freer. I love playing in both though, and they both give me an extreme level of satisfaction.

I also steer clear from social media, I am not interested in what people carry on about on there. Come and see me in person at a concert, then we can talk”.