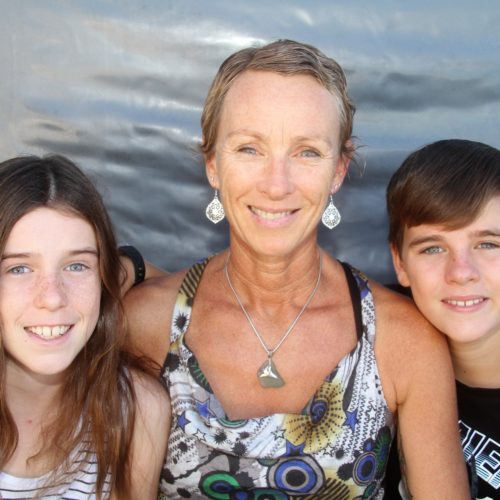 Vicki first came to my attention quite a few years ago at a Paddle Out For The Whales Ceremony in Hervey Bay, this event was all about celebrating the whale season and encouraging whale conservation. On this day Vicki was talking about the whales to a crowd of people, and I remember looking at this blond passionate girl with the most animated eyes, engaging personality, and the biggest smile, that I have followed her ever since. Vicki’s whale photography is amazing, and through her, I have watched each whale season unfold. Recently through social media I have watched Vicki battle with Breast Cancer and all of the procedures endured. This was followed by the horrific injury to her eye. Vicki is mum to two children, daughter Kiarni, 10 and Rory, 11, and has a husband named Stuart. Daughter Kiarni said that “ Her mum is so special, and has a great love for marine life. She is also always positive and happy”.

It took me about three years to fall pregnant with my son Rory. I was an older mum about 35 at the time and I have to say that it changed my life. Before kids I had gone out to pubs, socialised, and partied. After having Rory It was great to have somebody else to look after to love and cherish, then a year and a half later Kiarni came along, I don’t think that I have loved anybody so much as my children and my husband.

My son Rory overcame a massive brain bleed when he was eight years old. We are so lucky as he had a miracle recovery after rehabilitation. That was the worst thing that I have ever had to deal with regarding the children. To think that I could have lost my son was the most devastating thing in my life.

I was diagnosed with Breast Cancer in 2016, and in the same year had a bad eye injury from some broken glass while loading bottles onto the whaleboat, Tasman Venture.

After Rory’s episode, I guess it was a bit of a cruel episode to go through something else so major not even three years later. I am a pretty strong person so the initial diagnosis was, ok so let’s get on and do this. But at the time I didn’t know where I was heading as there were so many appointments and people to see. I did break down a couple of weeks later for a couple of days when the scary thoughts came in as to what was going to happen, and about the kids. I realised that this is heavy, but I had to deal with it and soldier on.

Then my eye accident happened which in one way was worse than the cancer stuff because with the cancer stuff I was doing Chemotherapy but I was lucky enough not to get any side effects. Everyday life was pretty normal for me, I was still doing all of the things that I did before.

Three days before I was due to start work with the whales I had my eye accident. I was still on Chemo and I found myself back in hospital again. So there was I sitting in a hospital in Brisbane, not out there with my whales. Then I got told how serious my eye was, I could have lost my eyesight for good because at that stage it was touch and go. I was in the Brisbane hospital for five days not knowing what was going to happen.

So with cancer, I was living life pretty normal between many appointments. When I had my eye injury everything stopped, I couldn’t drive, couldn’t go to work, I couldn’t take the kids anywhere as I could not drive for seven weeks, so things changed hugely for me.

I have finished all of my radiation and chemotherapy now. At the moment I am doing the natural thing in preventing Cancer from coming back so I am living a healthy lifestyle eating alternate food and concoctions to try to keep my estrogen levels down as it was a hormone positive cancer. I am seeing great results in keeping the levels down and have regular testing for this. If I find that what I am doing is ineffective then I will re-evaluate. I also have regular mammograms.

My family were very supportive during my diagnosis. We are a very strong family now because of all the things that we have been through. My kids are very resilient and grounded.

This year I celebrate 20 whale seasons as a Tour Guide and a deckhand on the Tasman Venture.

The save the whale campaign trail has got stronger and stronger for me over the years, I even assist in some research from time to time. Then of course in 2015 the Documentary, The Whale Whisperer produced by Greg Grainger was made. of which I, at the time unwittingly became the star of. We filmed for nine days In a little boat so we would zoom around trying to find pods. It was great getting the spotlight on Hervey Bay Whales and for me the big thing was that the focus was a lot on the conservation side.

This year I just want to get back to work and get my eye sorted. Unfortunately, there will be permanent damage. Sunlight is a major issue as my life and my work is out in the sun. But I am going to have to deal with that at some stage. I will have to put this injury aside when we get to the end of it medically. My bosses have been unbelievably supportive throughout my Journey.

I have to get back on the boat to be with the whales so I am going to be very strong and move forward with the injury as I do in life.

My advice to mums out there is don’t sweat the small stuff, spend quality time with your children because accidents happen you just don’t know what’s around the corner. I am trying to instill in my kids what I have learned over the years about being resilient, good mannered living life to the fullest, and chasing your dreams.