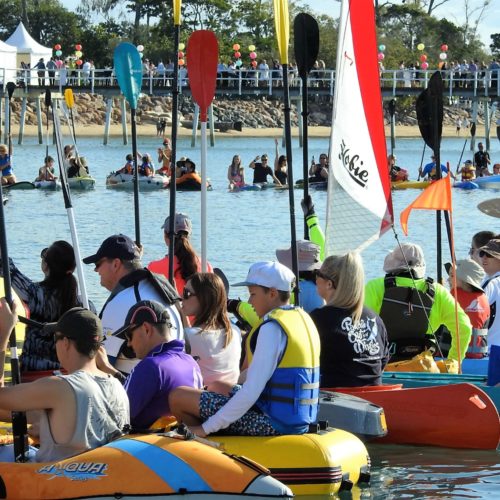 Enjoy oceans of fun this August with a jam-packed program of events as part of the Hervey Bay Ocean Festival!

A gigantic showcase of events and entertainment over nine days from August 11 will highlight the region’s deep connection with the sea; including the world-famous whale-watching season, and celebration of the mouth-watering seafood for which the Fraser Coast boasts.

Blessing of the Fleet: In the opening event, the Fraser Coast’s famous fleet of whale watch boats are blessed in a centuries-old tradition at Hervey Bay Marina to ensure a safe and prosperous season.

Visitors can tour the many whale watch vessels, wander through market stalls and enjoy a sail past, fabulous fireworks and live entertainment.

Blessing of the Fleet

Hervey Bay Seafood Festival: The following day, August 13, is one to savour with this annual festival offering something for all tastes. Hosted by the local industry who catch Hervey Bay’s famous seafood, the event serves up a host of fresh and delicious wild-caught ocean produce, loads of entertainment, competitions, cooking and catching tips (plus more) at Fishermen’s Park, Urangan Boat Harbour.

Other tasty morsels include cooking demonstrations from leading chefs, seafood and fish-smoking master-classes, a prawn eating competition, sideshow alley and loads of freebies.

Whale Parade and Concert: Next on the Ocean Festival menu features an enchanting spectacle of lights and floats representing the humpback’s annual migration, followed by a fabulous free concert with leading Australian and local artists.

The floats return with this traditional local favourite promising to delight all ages with an array of colour and an unmatched atmosphere with the Hervey Bay Esplanade transformed into a sea of activity.

Paddle Out for Whales: This conservation and awareness based event is full of heart with visitors encouraged to jump aboard a paddleboard, kayak or boat to celebrate a love of whales in the whale-watching capital of the world.

The Fraser Coast is Australia’s Home of the Humpbacks where the natural shape and calm protected waters of Hervey Bay offer a natural playground for thousands of the majestic mammals, and the best up-close and personal whale watching encounters in the world.

Every year more humpback whales are migrating from Antarctica to the warm waters of the Whitsunday Islands to breed. With the figure now an estimated 22,000 humpback whales making the journey, this message of love and conservation remains as important as ever with the humpback numbers rebounding from perilously low numbers as an endangered species in recent history.

On their return journey between late July and early November, proud new humpback parents and the cutest calves on earth make a temporary home in the tranquil marine environment of Hervey Bay creating a wonderland of intimate and interactive whale activity.

Paddle Out for Whales
Live entertainment by Sam Maddison

The Hervey Bay Ocean Festival is a nine-day festival that will thrill and delight. The Fraser Coast would like to invite all to be a part of the fun! For more information please head to herveybayoceanfestival.com.au.