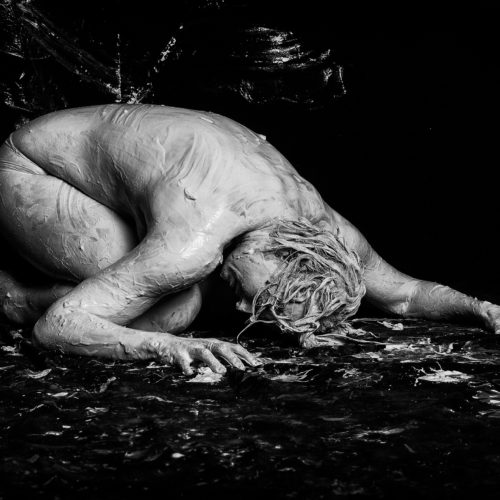 Battlefield is the must see exhibition for 2017 and Hervey Bay Regional Gallery will have it on Display from October 27th. Discussing the cycle of domestic violence and subsequent liberation from the grip of abuse, Battlefield is a brave choice of exhibition that cannot help but provoke it’s audience.

Following a successful showing in January 2016 at Gataker’s Artspace in Maryborough, with positive and compelling community feedback from visitors to the gallery, artists Susie Lewis and Hayley Groves George have continued to work on and develop Battlefield into a bigger and even more compelling visual event.

On display will be award winning works including ‘He says I think too much’ which won first prize for a contemporary/abstract work and the powerful digital piece ‘Known Enemy’ which won a prestigious First Place Prize in the 2016 Rio Tinto Martin Hanson Prize for Digital Works.

Thrilled to be moving the exhibition to Hervey Bay’s Regional Gallery, Susie and Hayley attribute the success of the work so far to the honesty of the story they are sharing and the strength of their friendship and working relationship. Unafraid to take risks, there is a raw emotive underbelly to each of the pieces that exposes a very vulnerable side to these two brave ladies.

Visitors to Battlefield will move through processes of creation including 2D mixed media, film and installation and be exposed to images from the stages of violence and abuse to a life defined by liberation and freedom. These big contemporary themes and modes of creation will meet seamlessly through the modern and fluid space that is Hervey Bay Regional Gallery.

Susie says ‘I have always believed that artists are a fair barometer of society and by being invited to exhibit at the Regional Gallery we can safely say, this community cares about this issue. Knowing that the statistics suggest that 1 in 4 women have been exposed to domestic abuse of some description at some point in their lives makes me feel that this is a very sad indictment on family life for so many. If Hayley and I can be even a small voice to shine a spotlight on the issue I will be incredibly satisfied.’

Hayley adds, ‘Susie and I have signed up to be White Ribbon Advocates and Battlefield will be an official White Ribbon event with an Ambassador from White Ribbon looking to attend the opening night festivities. The White Ribbon Campaign is based around the message that a man is never to commit, excuse or remain silent about violence against women and that is a specific message that aligns with the exhibition.’

Battlefield marks a significant achievement for Susie and Hayley and both women are passionate about reaching out to empower other women who may be suffering as they once did.

Susie explains ‘I am often asked how I would envisage fixing the problem and honestly I wish I knew the quick fix. It is an insidious and often private condition that is not always easy to identify. For me personally, the change came when I understood the part I played in the cycle of abuse. It floored me to believe that I was a player in that cycle especially because I was the one suffering but that day I chose to become a warrior for my life. If I was a player in the cycle and I understood the part I was playing, I could make some changes. This empowered me and I hope that empowering other women to understand the cycle of abuse may unlock the door for them to have freedom from it. Is it easy to break? Absolutely not and I hope my words don’t sound flippant. Claiming back your life makes you feel more like some kind of warrior rather than just a survivor or a victim’ Battlefield is more than just the fight you had with ‘him’, it’s the fight to claim back your life.’