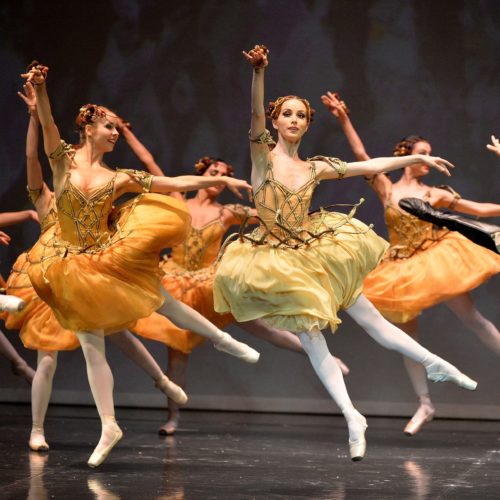 Following their sell-out performances of Swan Lake and The Nutcracker, the Imperial Russian Ballet Company returns to Australia. This diverse and stunning program in three awe-inspiring acts is proudly presented by Russian Ballet Ltd.

The Imperial Russian Ballet Company has performed this three-hour ballet extravaganza all around the world, thrilling audiences, and impressing critics. This stunning and diverse program consists of an eclectic mix ranging from the magnificent Don Quixote, to the hilarious Can Can Surprise and from the dramatic Bolero to the beautiful Giselle and Dying Swan.

Don Quixote, a retired gentleman travels the roads of Spain searching for glory and grand adventure. Accompanying him is Sancho Panza who he has persuaded to accompany him. Don Quixote gives up food and shelter for the love of a peasant woman.

Don Quixote was first performed in Moscow’s Bolshoi Theatre in 1869. Since then it has been performed all over the world by Russian and international ballet companies.

“Bolero” is a striking and dramatic ballet. Ravel was inspired to create the masterpiece after visiting a large industrial factory. There he noted the slow regular movement of the assembly lines, and the crash of machine and materials. “Bolero” is regarded as one of the world music’s masterpieces.

Highlights from the world’s great ballets including Giselle, The Dying Swan and Le Corsaire. Also in Act Three, Gopak, Ne Me Quittes Pas, and a Can Can Surprise

The Imperial Russian Ballet Company was formed in 1994 by the Bolshoi Theatre soloist, Gediminas Taranda. They have combined the unity and integrity of the great Russian Ballet Schools where traditions are passed on from one generation to another. The founders of the company acknowledge and respect the Russian Imperial dynasty which has made such a contribution to the development of the arts and in establishing the system of Imperial theatres including the Bolshoi and the Mariinsky theatres. The prime choreographic style adopted by the Company is a classical one, however, they also indulge in modern dance. Their stage repertoire is based on the combination of classical masterpieces and modern choreographic pieces.

The Imperial Russian Ballet Company has been touring worldwide since 1994. They have staged classic masterpieces in the Tchaikovsky Concert Hall and the Mossovet Theatre. The home venue for the troupe when they perform in Moscow is now the Kolobov Novaya Opera Theatre. The cast of 36 elite dancers and support staff will travel throughout Australia and perform at the Brolga Theatre, Maryborough on Wednesday 15 November. To book go to: http://www.ourfrasercoast.com.au or phone: 4122 6060

“In a night that overflows with all things ballet, you can’t help be swept up by the sheer panache of the Imperial Russian Ballet Company dancers.”

Karise Eden is excited to return to the stage