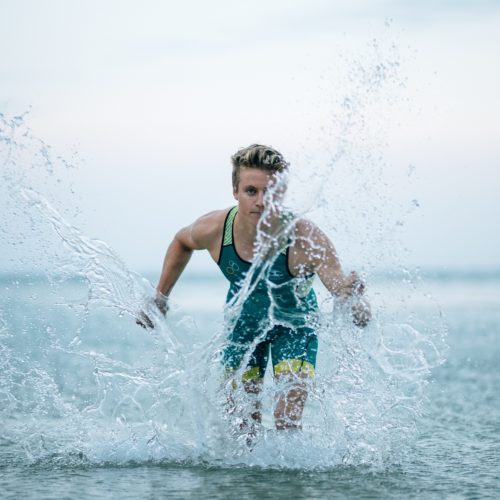 For the Fraser Coast it has been a proud tradition that triathlon has thrived throughout the community. Growing up, I was lucky enough to be immersed within that culture through the Hervey Bay Triathlon Club. It’s outstanding what the Fraser Coast has done in developing young athletes like myself, providing a breeding ground for success. Under coach Brian Harrington I was apart of a squad that at one stage had three national school triathlon champions.

You have to remember with professional sport, there is no such thing as sacrifices, there are only decisions. I needed to make one of those professional decisions when I moved to the Gold Coast, leaving my family and the comfort of my home at 17 and surrounding myself with the best athletes in Australia with one goal in mind, to reach my potential as an athlete. I now train 17 times a week, in the pool, on the bike, on the run and in the gym, not to mention massage and physiotherapy.

When you compete in a very consuming sport like triathlon, you need ‘getaway’s’ to ensure the longevity of your career. I’ve found passion’s such as body surfing, vinyl collecting, photography and coffee. With the amount of money I’ve put into Minimalist Coffee Roasters in Hervey Bay, you’d think I was a part owner of the store! I’m also studying a bachelor of business at Griffith University. If you want to pursue a career in sport, make sure you have a back up plan for life after.

Now I believe that everything happens for a reason, I’ve had some good races and I’ve had some shockers. Embrace the bad races, I’ve learnt that each mistake made is an opportunity to learn and to grow. In reflection, I’m half excited by a poor result, it’s a humbling experience and I love the challenge of picking myself up and getting back to the top. Who doesn’t like a good underdog? I set out to win the world championship last year in Mexico, but I was well and truly humbled and placed 45th. As I finished, I was becoming quite emotional but I turned around and remembered seeing my Dad approach my coach Dan Atkins, the only thing that was shared between them was a hug, a powerful moment that meant more to me than just an embrace. I realised good races come and go but your support team and your friends and family will never waver. I’m eternally thankful for that.

This year was a chance to get back on top. The Rotterdam ITU World Championships, and I wasn’t going to let this opportunity slip through my fingers, not again. After becoming the mixed team relay world champion in Germany with team Australia, I was riding a wave of confidence. My coach said to me before the race, “Matt, just stay in the moment”. That’s exactly what I did, I had a strong swim and lead out of the water in cold and wet conditions, the first 5 minutes of the bike leg was ‘knife edge’ stuff. A group of 10 of us got away and started to extend the gap back to the bulk of the 80 man field that followed, the course was unfamiliar to us all as we navigated the jagged cobble stones that lay strewn across the soaked streets. Working with two others, we made sure the pace was rich, I was thinking I could likely outrun most in my pack but was unsure how I’d fair against the strong runners coming from behind. We hopped off the bike with a healthy margin and I settled into my rhythm on the run, I felt stronger as the 5km course dragged on and a rush of relief settled my tense mind as I entered the home straight for the final time. With a 28 second margin I crossed the finish line and embraced my mum. From 45th to 1st in the space of a year. To me, that victory signified the start of my career.