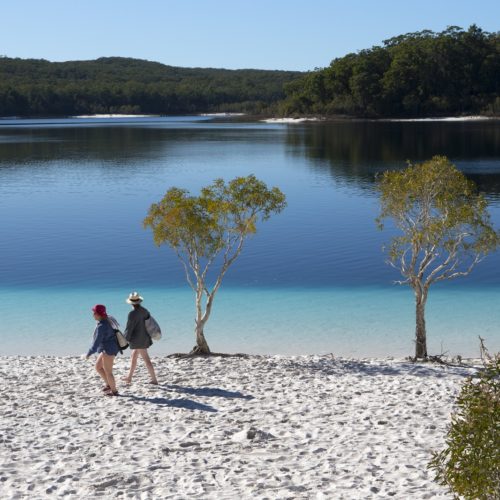 December 7 this year marks the 25th anniversary of the World Heritage Listing of Fraser Island and everyone’s invited to celebrate by visiting and learning more about why it’s so special.

“It’s the biggest sand island in the world, stretching for more than 122km, expanding to 22km at its widest point and covering 1840sq km,” he said.

“It’s where rainforests grow out of the sand, ancient dune systems and coloured sand cliffs are still evolving and it’s the home of half of the world’s freshwater dune lakes.

“There’s no doubt it’s an amazing place and we’d invite people from around the region, around Australia and around the world to mark the World Heritage Listing milestone by learning more about the island and planning a trip to see its exceptional natural beauty for themselves.”

The island was the traditional homeland of the Butchulla people for at least 5000 years. They named it K’gari, after the legendary spirit princess who helped to create the island. The Butchulla people’s non-exclusive rights over 164,958 hectares of land and waters on K’gari were recognised by the Federal Court of Australia on November 7, 2014.

The Butchulla people are said to have lived by three lores: What is good for the land comes first, do not touch or take anything that doesn’t belong to you and if you have plenty, you must share. Their heritage is evident in archaeological sites, middens, ceremonial bora rings and stone implements.

The island is now a world-class tourist attraction, coordinated by the Department of Environment and Heritage Protection and managed day-to-day by the Department of National Parks, Sport and Racing’s Queensland Parks and Wildlife Service with vehicle and camping permits issued via qpws.usedirect.com/qpws/.

It was also once a major centre for timber logging and sand mining. Many of the older homes in Maryborough were built with kauri pine, taken during the 128 years the island was logged between 1863 and 1991.

Sand mining began in 1949 and was stopped in 1976 in what was then a controversial move with environmentalists taking their case to the Australian High Court – not before an estimated 200 hectares of dunes were removed from the island.

K’gari was also used for cattle and sheep grazing in the 1890s and the brumby legacy that still exists today is a hangover from the time horses were used for transport and industry.

Kingfisher Bay Resort senior ranger Ann Bauer said visitors to the island were encouraged to take only photographs and leave only footprints to preserve the unique environment.

“K’gari lives up to name which means paradise,” she said. “With Fraser Island becoming world heritage listed 25 years ago, now K’gari will remain as a paradise forever.”

Mrs Bauer has amassed an incredible array of information about the island during her 20 year-association with K’gari and said one fact some people were surprised to hear was that the Hammerstone Sand Blow on the eastern side of the island near Lake Wabby was continually moving at a rate of about 1m a year.

“Eventually, they believe Hammerstone Sand Blow will end up smothering Lake Wabby,” she said. “In fact, Lake Wabby is a window lake, which means it is sitting at sea level. The water is rising up from the water table under the island.

“It is also known as a barrage lake which refers to how the lake was formed. Lake Wabby was once a flowing stream, similar to Eli Creek, but over hundreds of years the sand has built up and blocked the path of the stream causing the flow of water to cease, like a weir or dam.”

Mrs Bauer said it was also the deepest lake on the island – about 12m – and had 13 species of fish because it was once a stream that flowed into the ocean.

“What makes this place so special is that it’s continually changing, moving and growing,” she said.

“I’m forever drawn to K’gari. You can’t see it all in one day. You can’t just drive on the beach – that is just one part of many, many parts of the island.

“There’s nothing better than doing a personalised tour. I get so much pleasure in having someone shoulder to shoulder with me and stepping up to Lake McKenzie and seeing the expression on their face. That makes my day – to share what I get to see day-to-day. They get to see it for the first time and realise that it’s paradise. I never take the island for granted. I’m just as excited to see it.”

To start planning your visit to Fraser Island, go to visitfrasercoast.com.

1. Wanggoolba Creek is home to the magnificent giant King Fern – a relic from about 200 million years ago. It reputedly has the largest fronds of any fern on earth– up to 8m in length.

2. Much of the water from the annual average rainfall of 1600mm is absorbed into an enormous dome-shaped water table below the dunes. Some of this water may be stored 30m or more below sea level and for up to 100 years before resurfacing.

4. Fraser Island has half of the world’s perched lakes* and the planet’s largest perched lake – Lake Boomanjin at 200 hectares.

5. The lakes on Fraser Island provide poor habitats for fish and other aquatic species because of the purity, acidity and low nutrient levels of the water.

6. The appropriately named acid frog species have adapted to tolerate the acidic conditions characteristic of the island’s lakes and swamps.

7. It is the only place in the world where tall rainforests are found growing on sand dunes at elevations of more than 200m.

8. Scribbly gums are common on Fraser Island and can be recognised by the darker scribbles over their trunks which are formed by the hungry larvae of scribbly gum moths.

9. Fraser Island’s Valley of the Giants contains trees more than 1200 years old and greater than 4m across the trunk, all growing in sand.

10. Fraser Island has 43 large sand blows in different stages of progression. Sand blows form when the vegetation on sand dunes is broken by fire, wind, severe storms, walkers, vehicles or a combination of these disruptions. Strong onshore winds drive sand inland, eventually covering and smothering vegetation. These dunes will gradually stop moving when they reach areas protected from the winds.

11. Fraser Island has what is believed to be the only Reticulated (leopard) Patterned Fens, or peat swamps, in the world near Moon Point.

12. Wanggoolba Creek is known as the silent stream because the crystal clear spring water makes no sound as it flows over the sand.

13. Fraser Island supports more than 100 freshwater lakes and numerous freshwater streams and tributaries. The only area in Australia that has a higher concentration of lakes than Fraser Island is Tasmania.

14. Birds are the most abundant form of animal life seen on the island. More than 350 migratory and coastal species of birds have been recorded.

15. The dingo population on the island is regarded as the most pure strain of dingoes remaining in eastern Australia.

17. Butchualla people were forbidden to pick wild flowers as these had to be left for the bees which provided honey.

18. Once logged because they were found to be resistant to marine borers and sold as pylons, Satinay trees from Fraser Island were used to build the Suez Canal, Urangan Pier and homes in the local region as well as rebuild the London Docks after World War II.

19. Twenty-three wrecks were recorded in Fraser Island waters between 1856 and 1935 – the last being the Maheno which is a landmark attraction on the island’s eastern beach.

20. Seventy-Five Mile Beach is a gazetted highway with a speed limit of 80kmh.

21. Fraser Island’s sand dunes are some of the oldest in the world. In the past two million years, ocean currents and waves swept sand north from the continental shelf of New South Wales and southern Queensland. Sand accumulated and covered existing bedrock to form dunes parallel to the coast.

23. Sand is coated with mineral compounds such as iron and aluminium oxides. Near the shore, the air contains nutrients from sea spray which are deposited on the sand. In a symbiotic relationship, fungi in the sand make these nutrients available to the plants. These in turn supply various organic compounds to the fungi which, having no chlorophyll, cannot synthesize for themselves.

24. Vegetation stabilises the dunes. The young dunes behind the eastern beaches are colonised and stabilised by Spinifex grass and other coastal plants adapted to harsh salt and wind conditions. In the sheltered central regions of the island, where the dunes are stable and there are more nutrients for plant growth, diverse plant communities and rainforests are found.

25. The highest dunes on the island reach up to 240m above sea level. Most of the sand is made up of grains of quartz (silica) with less than 2% being other minerals such as the heavy minerals ilmenite, rutile and zircon.

*Perched lakes are formed when organic matter, such as leaves, bark and dead plants, gradually builds up and hardens in depressions created by the wind on top of the dunes. Perched lakes are dependent on rainfall to maintain water levels.