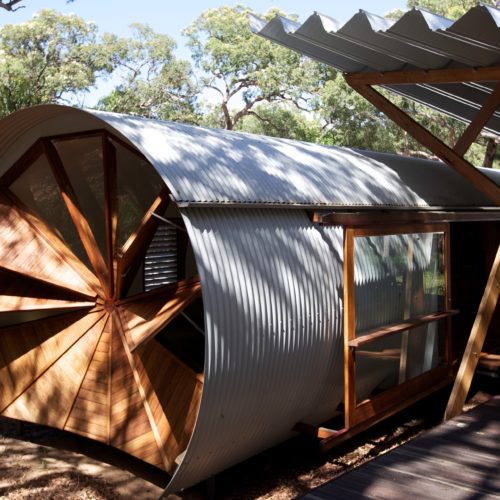 In Australia steel has played an essential part in the development of our design vernacular. In the hands of skilled Australian designers and makers steel has become an essential material that helps to articulate a national character and contributes to our distinctive material culture.

For the many thousands of varieties of steel there is one that seems intrinsically linked with the Australian identity, the corrugated steel sheets known as corrugated Iron. Synonymous with Australia’s rural and mining landscapes, whilst also forming an essential part of the classic “Aussie” back yard corrugated iron is durable, strong, adaptable and light.

The Drew House, 2010 by Simon Laws takes its cues from the architecture of Queensland’s cane growing region around Bundaberg. The dramatic visual language of the sugar cane mill its large scale boilers and turbines juxtaposed with the beautiful silhouetted forms of the corrugated iron water tanks and stands, find form in this holiday home. Built to be a luxury form of camping, the house operates as a piece of sculpture on a bushland site camped at by the Drew siblings for many years.

Established in 2007, Design by Them is a Sydney based design-company representing and producing the works of Australian designers. Founded by Industrial designers Sarah Gibson and Nick Karlovasitis, Design by Them creates a playful collection of fun and functional furniture and lighting. Made of mirror polished stainless steel, The Corro Bowl, 2009 is a beautifully refined corrugated form accentuating steel’s inherent strength and fluidity.

Lorraine Connelly-Northey is a Waradgerie woman from Swan Hill in north-west Victoria. The strong cultural practice of weaving is translated in her work transforming found materials particularly agricultural detritus into traditional forms such as koolimans (coolamons) and narrbongs (dilly bags). Her choice of material from Australia’s frontier and colonial history reminds us of Australia’s fraught history with its first nation’s peoples.

Australia like most countries has many cultural tropes and myths surrounding its identity. Apart from the traditions of our first nations’ people, Australian identities have been forged through many lenses including our convict past and colonial frontiers with its bush ranger legends, the Anzac traditions of courage and sacrifice, to one of the most mythologised ‘Aussies’ that of the counter culture surfer history of the 1960s and 70s. Trent Jansen looks to these myths to create designs through a process he describes as design anthropology. his Tidal collection, 2015 for Tait conjures long laid-backed summers spent relaxing at the beach or by the pool.

Steel is the most recycled material on the planet, more than all other materials combined. The amazing metallurgical properties of steel, allows it to be recycled continually with no degradation in performance, from one product to another. The recycling of steel can be seen in the beautifully crafted knives of master knife maker Barry Gardner. Working mainly with Damascus steel, Gardner tiers up layers of molten steel sourced from old files and band saw blades which he then reworks, twisting and folding to create the distinctive and unique patterns.

From an ancient craft, to one that works with modern technology to realise its final result, Maureen Faye Chauhan’s intricate mild steel brooches are realised through the manipulation of 3D images in advanced computer aided design programs and laser printing. Working with fundamental geometric patterns found in nature’s building blocks, Chauhan relies on repeated elements and the strength of steel to create her complex forms.

These are just a mere snap shot of 29 contemporary Australian exhibitors in STEEL art design architecture. The third in a series of exhibitions STEEL showcases innovative works by providing a cross-section of current creative practices, modes of thinking and relationships to this essential material.