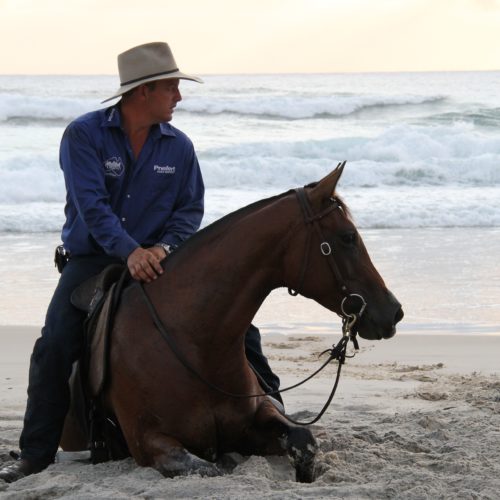 World champion horseman and entertainer Guy McLean has wowed crowds of up to 8000 in stadiums across America and Canada and is excited to be bringing his show home to the Fraser Coast in a special one-off performance on January 27.

In a coup for the region and great family entertainment value on the Australia Day long weekend, Guy will perform a two-hour show at Hervey Bay’s Seafront Oval.

The Guy McLean Spectacular is being hosted by Fraser Coast Tourism and Events supported by councillors’ discretionary funding.

This has enabled the event to be staged at the special ticket prices of $20 for adults, $10 for children and $50 for a family of four.

Guy grew up at Susan River Homestead Adventure Resort, between Hervey Bay and Maryborough, and has childhood memories of going to rodeos, carols and Aussie Rules footy training on the Seafront Oval. He left Australia in 2010 to launch his international career.

Fraser Coast events manager Robyn Peach said it was a thrill to book the renowned horseman and performer for a local event.

“His shows aren’t just for people who love horses, they’re for everyone,” she said.

“I think people will be impressed by the special connection he has with his animals and to hear the lessons that he shares, that he’s learned from his horses, which are universal.”

Guy said if you were a good horseman, you had the opportunity to be a good parent and a good partner – “it’s all just relationships”.

“The lessons they’ve taught me are far more wide reaching than anything I’ve learned in the human world,” he said.

Being able to perform at the Seafront Oval “in front of that beautiful beach in one of the prettiest towns in Australia is really exciting”, Guy said.

The Australian Stock Horse Ambassador is also looking forward to showing children they can chase their dreams to the other side of the world if they want to.

“That means more to me than anything,” he said.

“So when I go to schools, I say to them whether you want to be a doctor, a policeman, a fireman or anything that you want to be, if you dedicate your whole entire life to it, this is what it looks like.”

The youngest of five boys in family of six children, Guy was probably the most awkward but around horses, he felt comfortable.

“To be able to share them with the world and see people get so excited about them is just fantastic,” he said.

“My shows are never the same – they always have the same core principles but I’m able to express what’s in my heart and that’s the coolest thing.

“That’s what I love about horses and my steer Faith, they live in the moment, and from moment to moment it can change. They’re so real with everything, there’s no lies in the animal world and I love that.”

“I’m very aware that if they weren’t sitting there I’d just be performing to myself,” he said.

“I do so many hundreds of hours here at home with nobody watching, I really enjoy the company of the crowd.

“Even as a 42-year-old, I’m still quite a shy individual but I’m an entertainer, when I get out there I love being able to share it with everyone.”

In America, most of the crowd members were extreme horse lovers and “it’s like preaching to the choir a little bit”, Guy said.

“The crowds over there are incredible, they just go off, you can get a standing ovation for just winking your eye over there,” he joked.

“I’m really thrilled to have been able to do the Brisbane Ekka and Sydney Royal (Easter Show) over here because it made me as an entertainer.

“You had to do things that would bring non-horse people into it.”

Guy said it was wonderful to see people of all ages delighted by his horses.

“It brings me so much joy to be able to share it with everyone,” he said.

“People say to me all the time ‘Guy do you do clinics or do you teach other people’, I say if I was doing that I wouldn’t have the relationship I have with my horses.

“Everything I do is dedicated totally to the relationships I have with the team here and the two teams in America.

“It’s a big job to have so many horses understand at the level that they do but I dedicate my life completely to that.

“If you dedicate yourself, set yourself goals and dreams you can have them.”

To purchase tickets, which go on sale on Boxing Day, or for more information log on to frasercoastevents.com.