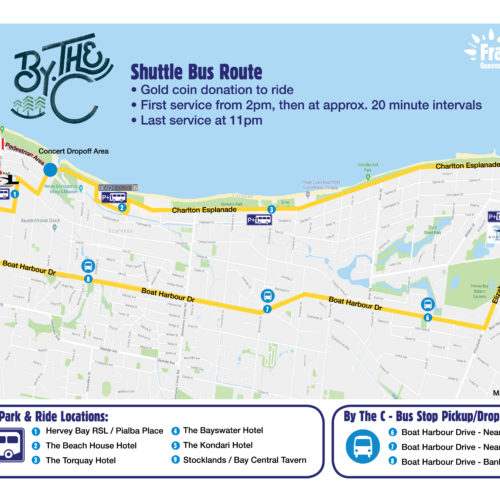 Buses will run from Maryborough and provide a shuttle service around Hervey Bay to ease parking congestion at the February 10 ‘By The C’ concert featuring John Farnham and other Aussie music legends.

A crowd of more than 5000 is predicted for the event at the Seafront Oval on the Esplanade, Pialba which starts at 3.30pm.

Robyn Peach, event manager for Fraser Coast Tourism & Events, said the buses would provide a no-fuss, low-cost option for people to easily travel to the oval for the concert to hear The Voice (John Farnham) along with James Reyne, the Black Sorrows and Ross Wilson.

She said the buses, supplied by G&D Ross Bus Charters and costing passengers a gold coin donation each way, were designed to help people avoid the hassle of trying to find a park on the day.

“Two Maryborough buses will depart from McDowell Car Park on the corner of Kent and Lennox streets at 2pm and 3.30pm and return after the concert with the final bus to the heritage city leaving Hervey Bay at 11pm,” Mrs Peach said.

“Shuttle buses in Hervey Bay will run on a continuous loop from 2pm till 7pm then less frequently between 7pm and 9pm before ramping up again after the concert finishes about 9.45pm and running until 11pm.”

The Hervey Bay buses will stop at:

Gates open at 3pm for the celebration of live music, food and community.

Zaccaria Concerts and Touring is bringing the ‘By The C’ celebration to the Fraser Coast in partnership with Fraser Coast Tourism & Events.

The concert will help anchor the region’s 2018 summer drive marketing campaign targeting tourists within a radius of about 300km and will draw more visitors into the area in February-March which are traditionally leaner months for the tourism industry.

Mrs Peach said almost a third of tickets already sold were to people coming to the event from outside the region, including as far away as Tasmania.

Tickets are still available from ticketmaster.com.au

Article and map sent in by Fraser Coast Tourism and Events