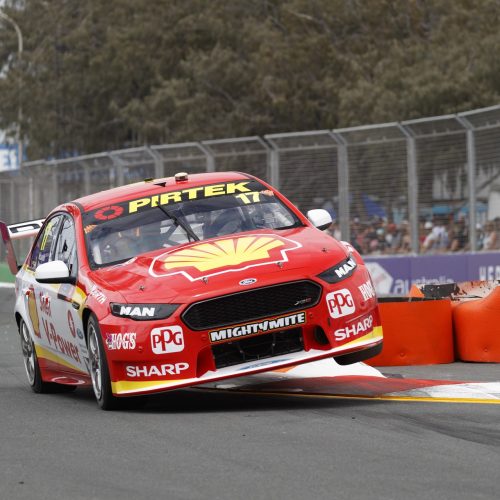 DungaDerby Car 42 team Ian Scott, Richard Boase and James Gill – are set when they host their first major fund-raising event at the Beach House Hotel on Friday, June 29, 2018, with V8 Supercars championship driver Scotty McLaughlin and his engineering mentor – Ludo. Fans of Ford and V8 Supercars would certainly appreciate they are a formidable force on the racetrack.

Scotty and Ludo, together with commentator, Riana Crehan are coming to Hervey Bay, to help raise funds for two extraordinary charities – Rally for a cause (DungaDerby) and The Charlie Teo Foundation. All due to the generosity of DJR Team Penske, Riana and a simple request from a local family.

WHEN Janine and Ian Cawthrays’ son Mitchell was diagnosed with brain cancer three years ago, “normal” life stopped. Whilst Mitchell and his mother lived in Brisbane for over 12 months, some of the financial strain was alleviated with help from charities such as Rally for a Cause. Mitchell underwent brain surgery, and a clinical trial consisting of 30 intensive sessions of radiation and just over 7 months harsh chemotherapy, before returning home to Hervey Bay in 2016. Ian continued operating their mechanical workshop during the week, travelling to be with his family in Brisbane each weekend.

As part of reducing their debt load and to help with business overheads, the family sold some of those items we all tend to accumulate. Some of those items were hobby items sold to Ludo Lacroix (chief engineer of DJR Team Penske). Ludo took a liking to Mitchell and when Ian asked if he would consider coming to Hervey Bay to help raise funds for charity, Ludo agreed. Ian and Janine were keen to assist Rally for a Cause continue to provide help to families such as their own, who are impacted by chronic or life-threatening illnesses.

“It’s amazing that Scotty McLaughlin is coming here, given that he’s championship points leader at the moment” Janine said. She also said that sponsors of DJR Team Penske, are rarely offered such an opportunity to get up close and personal with Ludo and Scotty. “It’s certainly a one-off opportunity.”

Team Car 42 are ready to ensure the event will maximise their fund-raising, with ticket sale proceeds going directly to Rally for a Cause. Funds raised from auction and raffle items on the night, will go to the Charlie Teo Foundation in honour of Hervey Bay’s Bree-Stella Blucher who lost her cancer battle in 2016. Part of Bree-Stellas treatment warranted her family relocating to Brisbane, before travelling to America for further treatment and then to Dr Charlie Teo for surgery. Bree-Stellas’ family have returned to Hervey Bay and now operate their family business ‘Fully Promoted’ in Main Street. They are fully supportive of this event and are pleased that their daughter continues to be thought of so highly.

Dr Teos’ charity was chosen as a beneficiary as funds are directed towards research, rather than administrative costs. Janine is also hopeful that there is continuing awareness for childhood cancers and the debilitating effects that treatment has on children, which can occur for many years after treatment has finished.

“Mitchell is doing well and we focus on the positive, however, it is a beast that is sleeping at the moment. We live each day as normally as possible, as Mitchell wanted to ‘be normal’ when he came home from treatment. It’s confronting when you see children dying of cancer, and families of a child with cancer live with this fear every day. We are grateful for every moment, as you never know if ‘it’ may return.”

Some items to auction/raffle on the night include –

With more items available on the night, it’s an amazing opportunity to win some awesome prizes and raise funds for two wonderful charities.