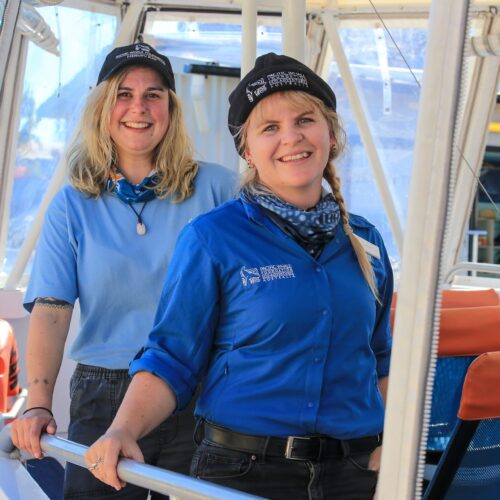 Marlene Stell, better known as Millie loves nothing better than the wind in her hair and the rise and fall of the ocean as she heads out for another day as Captain and Chief Engineer onboard Pacific Whale Foundation Hervey Bay. Being responsible for all things electrical as well as the engines and the plumbing systems is not everyone’s cup of tea, but at only twenty-four years of age, this is where Millie really feels at home.

Tell us a little bit about yourself?

I am originally from New Zealand. I grew up living on a Vineyard in Hawke’s Bay with my parents and two sisters, I am the middle child. When I was ten years old my parents sold everything up and bought a boat so that became our new home.

We sailed around New Zealand then the South Pacific Islands. Eventually, after five years of sailing, we sold the boat in New Zealand and flew over to the states where I lived for the next four years. I was doing international deliveries when I was sixteen then left home when I was eighteen.

I learnt how to fix things with dad while growing up on the Vineyard, so when motorbikes and tractors used to break down, I would give dad a hand. He always wanted a boy and he ended up with three girls instead, one of us had to step up!

Tell us about the famous crossing?

When I was nineteen, my parents contacted me, I was in the Bahamas at the time – they had a boat in Panama, South America that they needed delivered to Australia.

Two days later I flew out of the Bahamas and into Panama, then caught a taxi early in the morning to meet my sister, we worked on the boat for a week to get it ready for the journey ahead. We scrubbed the hull, organised provisions, and then set sail. During our four months at sea, we saw a lot of storms, luckily, we never encountered any Pirates!

We nearly lost our mast twice though in two separate storms, had a few rips in the sail, and experienced engine issues, but even though there were some scary moments we worked through them all and made it to Australia.

When we were in Niue, my sister and I were looking for a DIY boatyard anywhere on the east coast of Australia and Maryborough slipway popped up. So that was where we ended up.

I hold a record in two countries in Niue and The Palmerston Island in the Cook Islands for the youngest skipper to clear through customs into those countries.

When I was about 19, I started work on my first whale watching boat on the Fraser Coast, I had no idea about whales at the time as I had only ever seen one.

How important is whale conservation and education?

We need to educate people about the effects and the dangers that are occurring with our marine life, this is why I am very proud to work for Pacific Whale Foundation and everything that they stand for.

When I was sailing to Australia,  I was in the middle of nowhere, I had not seen land or another boat for thirty-seven days but yet in the middle of the ocean I was still seeing rubbish in the water, it was heartbreaking. There has been word that plastic has been seen in the Mariana Trench in the Pacific Ocean, eleven thousand metres down – we really need to look after what we have right now otherwise it will not be here for much longer.

What do you enjoy doing in your spare time?

In my spare time, I enjoy scuba diving, kite surfing, paddleboarding, anything that involves the water. I love the adrenaline rush of new experiences, my favourite dive here is the Three Ships just off big Woody Island, I love night dives best.

I have fallen in love with the Fraser Coast, it is the reason that I have stayed. It has been my first full-time home since I left New Zealand when I was ten.

How has the whale season been so far?

The season to date has been amazing, we have had spectacular weather and the whales have been really inquisitive and very friendly.

To find out more or to book a whale watching tour go to www.pacificwhale.com.au