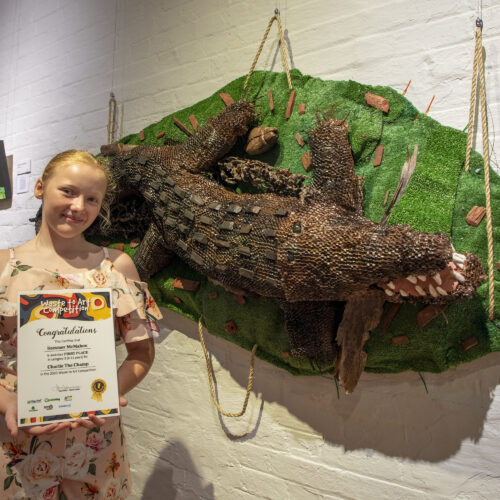 The winners have been announced but it isn’t too late to get involved with this year’s Waste to Art exhibition.

A record number of entries have been submitted and now the 137 works are on display competing for the people’s choice award.

Sponsored by Qmulching, Reuse & Recycle Group and Cleanaway artists were required to reuse and repurpose waste through works of art.

Fraser Coast Regional Councillor David Lewis said the competition was one of his calendar highlights.

“There are a lot of terrifically imaginative pieces here and clearly a lot of hard work,” he said.

“It has been great to see the artist celebrated.”

Cr Lewis said it was wonderful to see so many entries in the junior categories particularly from school groups.

“By encouraging young people to turn waste into beauty we are teaching a fundamental skill for life,” he said.

“It gives them such a good opportunity to think about recycling.

The sculpture was created after the charity that uses the donated caps to make prosthetic limbs stopped collecting during the pandemic.

The group were determined to find another use for the plastic.

Ms Kerr said although winning an award was a huge surprise, the real prize was the opportunity for their work to be displayed at the gallery.

“It gives them something real in the real world to actually put into practice not just the little bits and pieces we do at school” she said.

The winning exhibit, created by 11-year-old Summer McMahon, is a two-metre crocodile made from chicken wire and artificial turf, which took more than 50-hours of hard work.

She said she was inspired by nature and wanted to creating something big.

Drop into Gatakers Artspace in Maryborough before November 28 to vote for your favourite work.