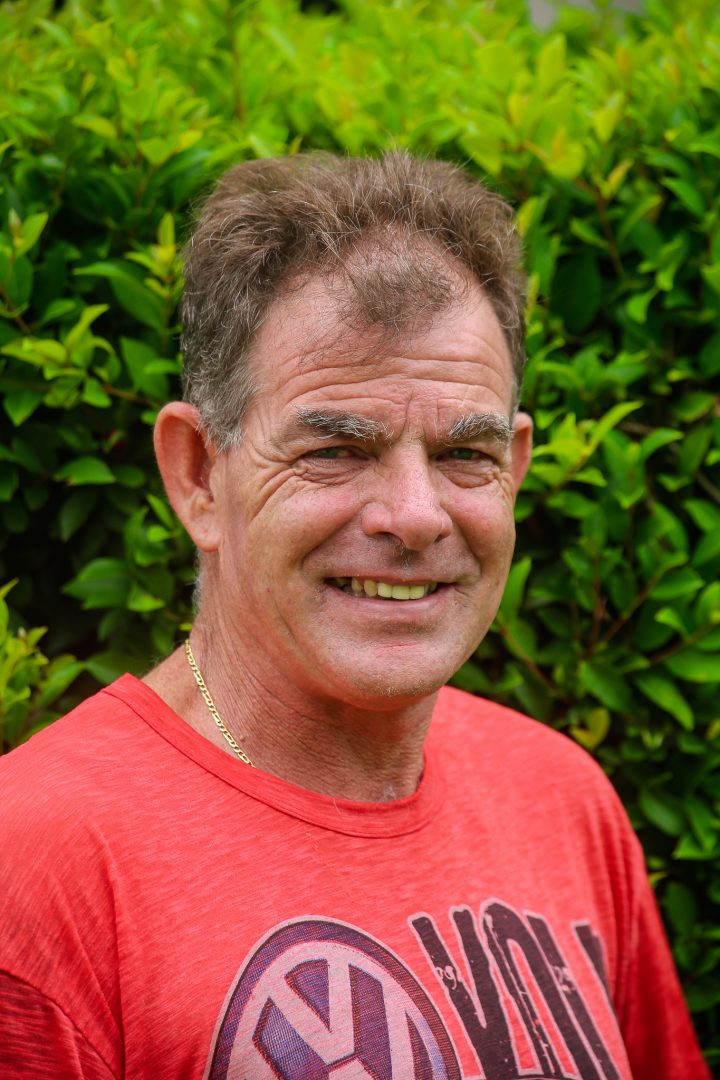 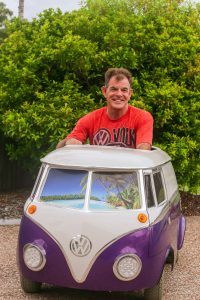 Michael Klink always greets you with a smile that goes from ear to ear. He is warm, engaging and has a great sense of humour; he is also a friend.

I first met Michael about four years ago through a mutual friend named Denis Maher. Denis is into low’n’slow BBQing in a huge way and would get a group of us around to his place to test his food whenever he was trying something new. We would gather and gorge on perfectly cooked brisket, lamb shanks, black pudding, and crispy pork belly that was BBQ’ed to perfection, and all lathered in the tastiest rubs. These private events were always a celebration of food accompanied by a little wine and lots of laughter amongst some great people.

Michael enjoyed low and Slow cooking too and would often be on the Low‘n’Slow BBQ Shack team with Denis and others. They participated in many BBQ competitions throughout the region.

He also took on full-time guardianship of his cousin Anneliese who has Downs Syndrome, and this meant that he had to give up his 8-5 job in IT, as he needed a job with more flexibility. But how to provide an income?

The answer came after Michael had his house built. He had to redo the lawns, but no one on the Fraser Coast had an aerator to hire, so he started his own business ‘Fraser Coast Lawn Coring’. Michael says, “I love my lawns and working outside. The flexibility was great and meant that Anneliese was fully supported”.

With the income providing security and Anneliese and partner Kim by his side, Michael took the plunge last year, after thirty years and decided to become an Australian Citizen. The couple even had travel plans in place to visit Thailand, and then Covid hit! But the future was still looking great!

A few months ago, I ran into Michael and Kim and was shocked and saddened when Michael told me that he had recently been diagnosed with Motor Neurone Disease (MND). I must admit that I only knew a little about it at the time. Michael is only fifty–two years old!

A few months after that, Michael reached out to me via Facebook and asked if I would consider doing an article on his condition to help raise awareness about this insidious disease.

The night before our interview, I researched MND on the internet, and my heart ached for my friend and for his family.

This would have to be the hardest interview that I have ever done, it was highly charged, very emotional, and there wasn’t a dry eye in the house.

Motor Neurone Disease is the name used to describe a group of diseases in which the nerve cells (neurones) in the brain and spinal cord that control the way we walk, talk, eat, swallow, and breathe progressively die.

Research has given us a greater understanding of MND, but there is no cure and no effective treatment. It kills a third of people within a year and more than half within two years of diagnosis. Although the disease will progress, symptoms can be managed to help achieve the best possible quality of life.

Motor Neurone Disease is an uncommon condition that mainly affects people in their 60s and 70s but can affect adults of all ages.

The average life expectancy of a person diagnosed with MND is 2.5 years.

What were the initial symptoms that prompted you to see a doctor?

One morning I woke up and had really sore calf muscles and thighs and I had no idea why. I used to run Marathons and know how sore they can be after a race, which is what it felt like. I knew something was up, but as I worked for myself, I pushed through. I waited a couple of days, but my legs did not get better.

When I was able to get an appointment with my GP, he sent me off for some blood tests, and then a series of other tests. When all of the results came back, he still did not have a clear picture, so gave me a referral to the hospital.

As an outpatient I was lucky to get the acting head of medicine looking after me he sent me for more tests including an MRI and a Cat Scan, all those tests came back negative to what he thought I might have. This left only one thing as everything else had been tested for.

I then had a muscle biopsy and a referral to the neurology department for a nerve conductivity test in Brisbane.

I was diagnosed with MND in September of 2020. The diagnosis took about six months as there is no test for MND; you have to rule everything else out first. 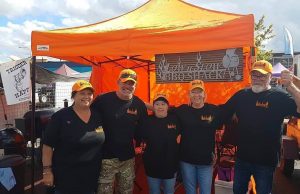 Tell us some of the things that we all take for granted that you can no longer do?

It comes down to the nitty-gritty stuff like squeezing toothpaste out of a tube or doing up buttons or zippers on clothing. These days my pants have to be elastic; otherwise, I can’t do them up myself.

I can’t stir my coffee anymore as I can’t hold onto the spoon, let alone open the carton of milk.

I also loved my fishing but can no longer go as all of the strength has gone in my fingers so I can’t tie knots or put bait on a hook.

I no longer have my motorbike or boat as I can no longer enjoy those either.

I mourn the loss if being self-sufficient and get very emotional from time to time.

How else has your life changed since the diagnosis?

Once I got diagnosed, it was hard. Not only do you have to wrap your head around the fact that you only have so long to live, but you have to have everything in place like organising an Enduring Power of Attorney, getting the will sorted, adding my partner Kim as Guardian of Anneliese. These are what you have to focus on. We also have to try to shield Anneliese from all of this and all while we are still trying to get our heads around it.

As far as Anneliese is concerned, we have told her that I have happy feet and jelly fingers. We have not had the conversation about MND with her yet as it is too hard. We try to keep things light at the moment until the time comes when we have no choice. We know that she will be very upset when we tell her, so want to wait until things progress.

Besides my partner Kim, I am all Anneliese has, as my dad is seventy-two and my mum is sixty-nine. Mum has a rare form of Dementia and can’t talk any more, so dad has to look after mum.

Nowadays, we take each day as it comes. I am still doing low‘n’slow, but the competition days are over. Most weekends we put on the smoker and smoke something from brisket to pork or beef ribs, whatever takes our fancy. Kim now does the meat preparation and seasoning as I have no strength in the fingers.

Before moving to Hervey Bay, I worked as a Senior Solutions Engineer in IT for the government in Canberra. I invented a program that made Australia safer as it stopped anybody from doing insider trading by protecting and auditing various devices. It was a way of protecting people’s information and government secrets. I was also the project manager and rolled the program out not just in Australia but also overseas. The program was installed in every secret and top-secret IT network, I was thrilled at what had been achieved.

I am also very proud of my business Fraser Coast Lawn Coring. I saw the need for a high-end lawn maintenance business and created one. In over four and a half years, I have serviced over six hundred customers and never had a complaint. I had a lot of regular customers each year, including the Fraser Coast Regional Council and the Bundaberg Council. One of the most rewarding parts of what I did was working along the Esplanade in Hervey Bay and hearing the comments from the tourists who would comment about how beautiful the parks were, and how they wished that their councils would keep their parks to the same high standard. I always got a buzz out of that.

A word from Michaels partner Kim

As the tests went on, we prepared ourselves for the worst and hoped for the best, but unfortunately got the worst with MND.

It will be tough for Anneliese as she has a very close relationship with Michael. Slowly the relationship is shifting because I have had to take more control as eventually, it will just be Anneliese and me. We don’t like to think about that, but we know it will come. To put it bluntly, it sucks! You have to watch someone you love deteriorate right in front of you it is heartbreaking.

Eventually, the nerves will take over every muscle. They shut down his ability to swallow, his ability to speak, and ultimately, the muscles in the heart will go. It will attack every single muscle in his body; we are devastated.

This has changed our lives in every way. We had so many plans, so many things that we wanted to do. We don’t have a bucket list we have a memory list, so it is all about making memories now.

We need to do more about building awareness about MND. People need to be aware of their bodies. Talk to your doctor if there are changes, don’t neglect it.

Another thing that people need to think about when everyone is still healthy is about the what-ifs. So, organise an Enduring Power of Attorney, make a will and keep it updated and make sure you have a medical directive in place. Otherwise, it is a mad scramble to get it all sorted and you won’t want to waste precious time on it once diagnosed.

The MND and Me Foundation supports people and their families living with Motor Neurone Disease (MND) in Queensland.

The Foundation delivers support programs and funds research into treatments and a cure for MND.

To find out more or to donate go to www.mndandme.com.au.

Images and information used with permission from Jane Milne, CEO of the MND and Me Foundation.