HUMAN NATURE is undoubtedly one of Australia’s and the world’s finest pop vocal groups. With hits like “Telling Everybody”, “Wishes”, “Every Time You Cry”, “He Don’t Love You”, and “Eternal Flame”. As well as their epic Motown catalogue of “Reach Out”, “Dancing in the Street” and Jukebox with “Run Around Sue”. It is easy to see why HUMAN NATURE are so popular. The band is also excited to sing their latest duet with good friend Guy Sebastian, called “Broken Humans”. Not bad for these humble boys who hailed from Sydney all those years ago. Kim Parnell, Editor.

Band member Andrew Tierney was kind enough to share some insight into friendship, performing, and their upcoming show.

How has your friendship with each other changed since you were in the schoolyard?

Over the years, our friendship has definitely changed from being mates to being almost like an extended family. We don’t hang out when we aren’t working together these days, but that’s because as a band, we have spent SO much time in each other’s pockets. We have learned to really respect each other’s opinions, and for the most part, our personal lives manage to stay out of the working relationship. I think that helps when we are singing and creating together, we click into a ‘HUMAN NATURE’ vibe that transcends friendship, and we can do what we do best – make music and entertain our fans as a band.

Share with us one of your stories from the road or recording studio?

We have a lot of fun stories that we have revisited, even putting this show together, the Boyband days, opening in Vegas, and all the while being able to keep making albums. One humbling moment might be our smallest ever crowd … we were playing a shopping centre in Adelaide. There was a total of four people in the audience … our manager, his wife and their two friends … that was it … we still gave it our best, but we did wonder if things might be heading in the wrong direction … luckily, we stayed determined, and the rest is history.

Human Nature dominated the Las Vegas Strip for over a decade; what was this period like?

Las Vegas has been so amazing to us personally and professionally. To have a show run for that long and be embraced by “The Entertainment Capital Of The World”, as it’s known, is so cool. It has made us better performers, given us a second home, and I also believe it has kept us together as a group – without Vegas, I don’t think we’d still be as active as Human Nature is blessed to be now. 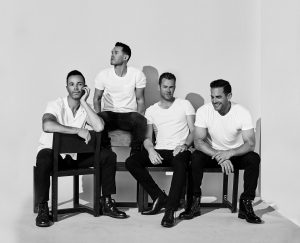 The group has supported artists like Celine Dion and Michael Jackson. Did you get to meet them in person? If so, what were they like?

Touring as the opening act for both Michael Jackson and Celine Dion was mind-blowing. I think that opportunity would be up there with one of the greatest anyone has heard of!! We did meet both Michael and Celine. As you can imagine, Michael was very private, and our meeting was super short, he was very nice and complimented us. Celine was so warm and welcoming. We actually sang her Happy Birthday on her 30th Birthday, it was backstage before a concert, and we have even caught up since in Vegas a few years back. She represents the utmost humility which I like to think we can learn from as artists and performers.

What can people expect to see if they come to your show?

It’s going to be a very intimate concert – focusing on the songs, our voices and the different stories that have led us right to that stage on the night. After this year of such disconnection, we wanted to strip it right back and get up close and personal with the fans that have waited a long time for us to come to their hometowns.

To book, go to www.brolgatheatre.org