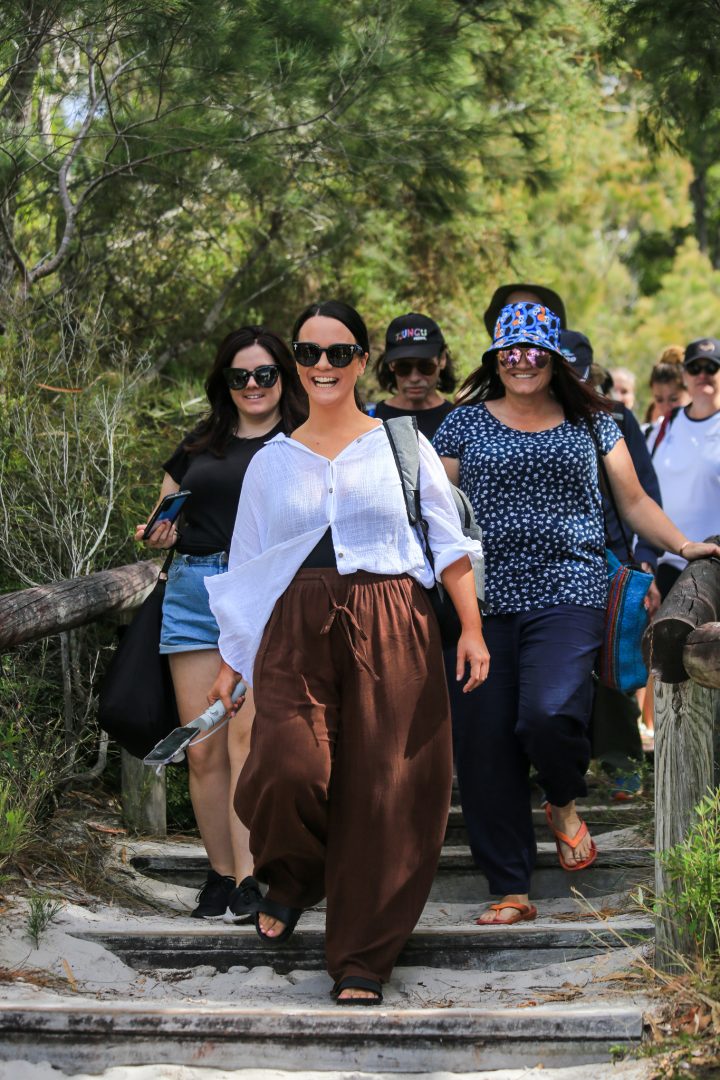 In January of this year, Community Lifestyle Agency (CLA) received an email about an incredible thirty-five-year-old woman named Chloe Geeves, who is facing the battle of a lifetime with stage four Bowel Cancer. Chloe is involved with an organisation called 100 Things which sparks us all to write a list of 100 things we want to do before we die.

It was an honour to meet Chloe and to capture the memories of her special day. I paused and saw the island in a different light, almost as if it was the first time.

You never know what tomorrow brings, so make sure that you get to live life to the fullest, enjoy every experience, and make lots of beautiful memories with those that are important to you. Cherish each moment!

Before Chloe’s diagnosis in March of 2020, travelling, yoga and spending time with family and friends were her favourite pastimes. Chloe also had a full-time job as a sales consultant for the wholesale department within flight centre.

“I had worked for Flight Centre in various roles for seven years and went on leave when I got sick. However, in June 2020, Covid had happened, and my role was made redundant as my department closed down, so I am not currently working”, said Chloe.

At the time, she was living with friends, so once diagnosed, she ended up back home with her parents in Capalaba so that she had someone to care for her throughout her treatment.

“The only symptom that I had was blood in my stool. My GP advised it was potentially tearing and gave me a cream. He told me to come back in three weeks if it had not stopped.

“In the meantime, luckily, I had an appointment with my gynaecologist, I mentioned this to him, and he did an internal examination and felt the tumour. Unfortunately, it had already spread to my lungs”.

Following her diagnosis, treatment began. This included twenty-five rounds of radiation, twelve rounds of chemotherapy and an operation. Chloe’s whole life was turned upside down, and on top of a cancer diagnosis, covid restrictions came into play, so that entire period was hard to comprehend.

“I think for at least the first year, I was probably in shock. It has been very hard. I am also dealing with side effects from my treatment that most people don’t associate with cancer, such as early-onset menopause and infertility.

“I have tried to remain positive and hopeful, but I do have my hard days, and I miss being able to be an independent young woman”.

A year after her first surgery, Chloe had a follow-up colonoscopy. Unfortunately, the chemotherapy she had already did not get rid of the lesions in her lungs as was hoped. She then had a six-week break from all treatment to give her body a chance to rest and then moved on to oral chemotherapy tablets.

Chloe says, “I went back to my oncologist, and it was decided I would be referred to another oncologist who looked after clinical trials. So, I am currently on an immunotherapy clinical trial. I go in fortnightly for infusions.

“I have had two scans since I began, and they show a significant reduction in the lung lesions, which is awesome! So, I will continue with this while I am responding to the treatment and my body is handling it. I am also on Hormone Replacement Therapy medication to keep the menopause symptoms at bay”.

Before Chloe’s diagnosis, she had been to a work conference and heard Sebastian Terry’s story about his global movement ‘100 Things’. According to his Facebook page, ‘the platform is designed to inspire, engage, and connect like-minded people to be the best version of themselves through the creation and pursuit of their own lists’.

When Chloe was first diagnosed, her friends managed to get her a signed copy of his book. After reading the book, she decided to write her own list and has a list of 60 things to date, and this is being constantly added to until she reaches her 100 Things. After contacting Sebastian, He shared her story with the 100 Things community, which is where Chloe first came into contact with Tayla from CLA.

Chloe says, “Lake McKenzie was number #44 on my list. Upon arrival, I felt a rush of excitement that I was there in the flesh. I was then overcome by how beautiful it was. It was such a special moment when I first got to dive into that beautiful clear water. I felt so grateful that I was given the opportunity to tick off a wish and that the team at CLA had been so generous.

“I absolutely loved my time at K’gari. Tayla from CLA did all the hard work organising a wonderful day trip around the island. I got to see all the hot spots, including Eli Creek, Central Station, Pile Valley rainforest and the Pinnacles, and Lake McKenzie. I also got to share the experience with some pretty special people.

“We had an amazing guide. Ian Butcher ‘Butch’ from K’gari Explorer Tours (formerly Fraser Explorer Tours). He looked after us so well, and he taught us so much about the beautiful island. Tayla also liaised with Lauren from Kingfisher Bay Resort, who offered us a complimentary two-night stay and a beautiful sunset cruise.

“I would definitely go back to Kingfisher Bay Resort. I love how it is nestled in nature but still has fantastic facilities and delicious food and cocktails! Unfortunately, there was no dingo sighting this trip, which gives me a reason to go back.

“I am so grateful to everyone involved in ticking number #44 off my list. CLA and Kingfisher Bay Resort really looked after us and gave me an experience of a lifetime. I also got a scenic flight with Air Fraser Island, which I loved”.

Bobs Tyres and TJM also donated some eskies for each participant to take home, these were very much appreciated.

Over the coming months, Chloe hopes to climb the Story Bridge and go Sky Diving. She admits that she is a little scared of heights, though, so she will be right outside her comfort zone.

Chloe would like us all to remember that if we feel something is off regarding our health, to make sure we get it checked out.

“Never in my wildest dreams did I think I would be living this life at thirty-five years old. Cancer can affect anyone at any age, so it’s always best to get anything checked out”, says Chloe.