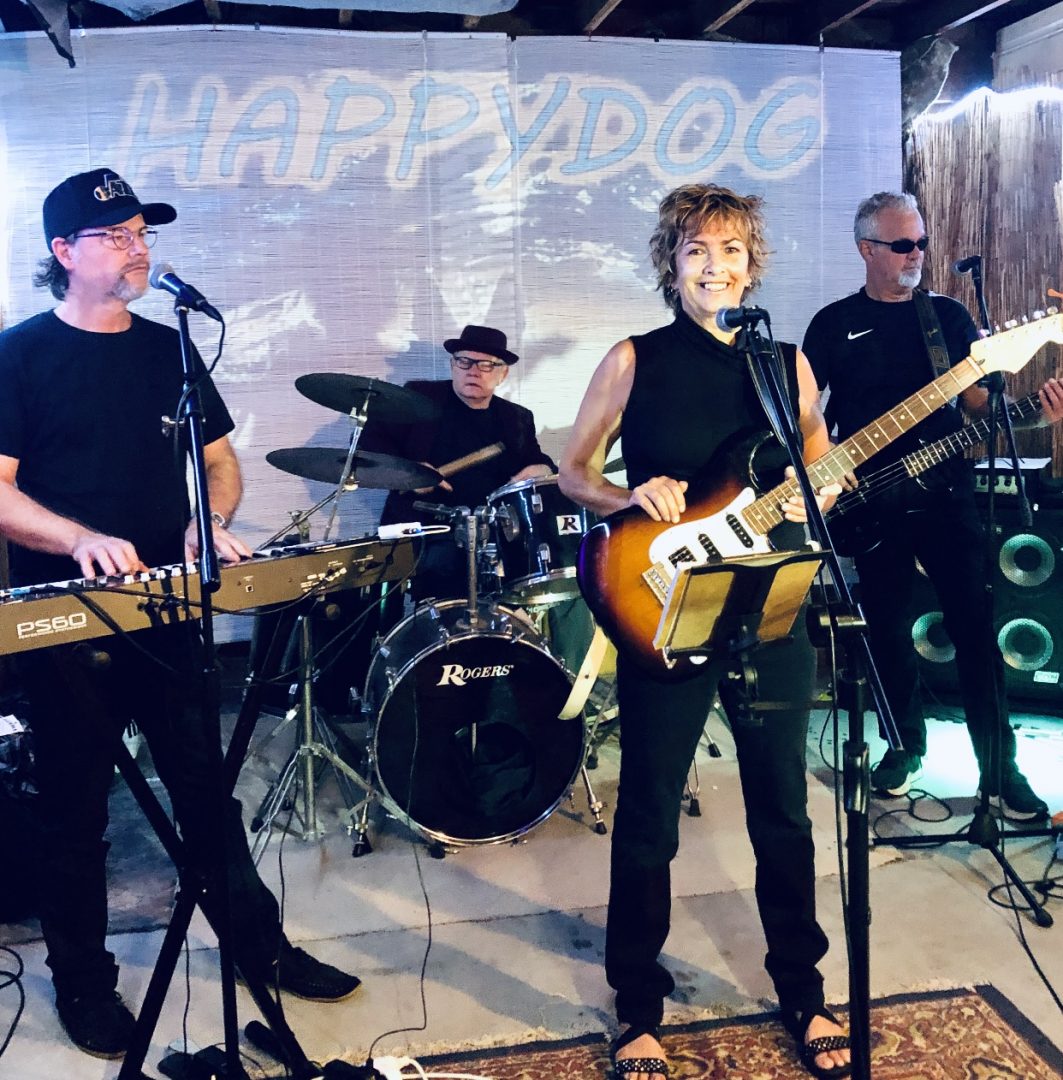 Tell us a little about the band and its members?

We are a 4-piece band. Our band members are:

We have all been in various bands, working in the music industry for over thirty years. We are based in Hervey Bay and met each other at an open mic day. We then decided to start up HAPPYDOG the band. We have a huge range of cover songs to suit all ages, from Elvis to Fleetwood Mac and everything in between, and recently played at the waves in Bundaberg.

Where did the name come from?

We thought of the band name HAPPYDOG because walking our dog on the beach, people would say, “He’s a Happy dog”, and we know how happy dogs are and how they live in the now. That’s how we feel when we are playing on stage, living in the now, and having fun creating music.

Do you write any of your own music?

Jacqui has written original songs earlier on, one of which was played on the radio in Tasmania, and continues to work on some new original pieces. Her husband Rob is the bass player in the band.

Rob, an accomplished drummer, is now playing the bass guitar and has recorded and supported major bands. He loves all types of music and looks forward to playing on stage.

Ken Slager has been working in the music industry for many years playing in all types of situations, from piano bars to big bands. He has played and toured in various groups around Australia for many years.

Steve Wright has been a session drummer for over thirty years, performing with a multitude of Australian, New Zealand, and international bands and artists both in Australia and Europe. In 2022 Steve was appointed to the jury panel for the prestigious 16th annual Bucharest International Jazz Competition.

What can people expect if they come to see you play?

When people come to watch us perform, they’ll hear a full-sounding band with multiple vocals and a variety of sounds and songs. A female vocalist who plays lead and rhythm guitar and an accomplished keyboard player, bass player, and drummer.

“Keep Music Live” we are sure the majority of musicians feel the same way. Live music keeps it real and is an outlet for artistic expression. We also care about our animals, so please be kind to them. Support your local animal refugees, animal carers, and the RSPCA.

We would love to see you at the next gig at the Hervey Bay Boat Club, from 7pm, on Saturday, July 30.