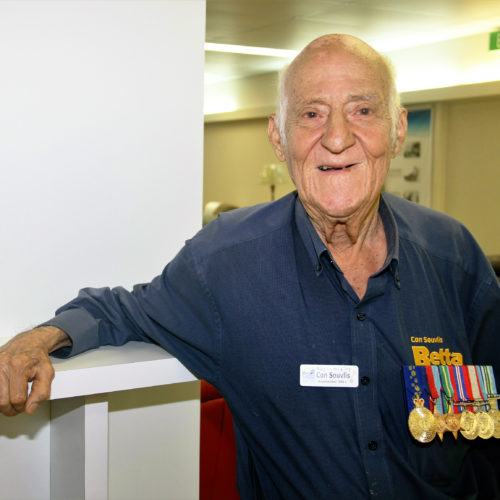 As I walk into Betta Electrical in Torquay to meet possibly one of the most photographed, reported on, and written about men in Hervey Bay, and indeed the Fraser Coast. I think about all of the things that I have read about him over the years that have always made him appear larger than life.

Con Souvlis spies me as I walk towards him, his handshake is firm but I see the twinkle in his eyes as he pulls me towards him for a kiss on the cheek..

We take a seat at his favourite table that is adorned with his ’50 Years in Business’ paper that he is very proud of it is joined by magazines, books about the war, and of course , ‘King Con – Biography of Con Souvlis.

Con was born in Innisfail, Queensland on September 13, 1925. He was the first child of Michael and Chrissanthi Souvlis who came from the remote Greek Island  called Kasteloriz.

His mothers name comes up quite often during our conversation. Con remembers how his father Michael was away a lot and he helped his mother feed and care for the family. He also talked about his love for her, and tells me of what a great lady she was. Con talks about how his mother used to ring a bell as the trains were coming into Brisbane station, and sold pies to the weary travellers.

Married once to a girl called Yvonne, they had four children named, Jonathon, Tina, Chris and Shanna, unfortunately the relationship did not work out. Con has remained single ever since and has surrounded himself with family and friends.

Con describes himself as, “A proud Greek-Australian, who fought in the Second World War for Australia”. Throughout our conversation the war years are brought up often, those years affected Con throughout his life, he talks about seeing eight soldiers dying in front of him after drowning In the Tagessi River Swamp.

Throughout his life Con has been known as a leading business man and philanthropist. From selling fruit door to door, owning a paint store and Electrical stores, along with a Newspaper, and dabbling in real estate. Con has called Hervey Bay home since 1959, the population was roughly 3000 at the time, and the Esplanade was just a dirt road. What Con saw was a place filled with a huge amount of opportunity for those that wanted to grasp it, as Con did in spades.

With a massive heart Con has given hundreds of thousands of dollars over the years back to his community. He is patron of many clubs, groups and organisations. He has also helped found and funded lots of projects from the Vietnam Vets, Meals on Wheels, the Extension of Freedom Park, and many sporting groups, just to skim the surface. Con has also given 27.5 acres of land to Bay Crest Retirement Village over the years.

We end our conversation with a photo session in the ‘Lazy-boy’ section of Betta Electrical. On the way Con holds my hand tight as I escort him down the isle. He spies a customer, and we stop. Con looks the Customer straight in the eye and says, “And how may I help you today”. The customer assures Con that he has been well looked after, then when Con is ready we keep going towards our photo date. It is hard to believe that Con will be 92 in September,. As we part we share another kiss.

I think Con leaves everybody he meets with a lasting impression. The man definitely is larger than life.