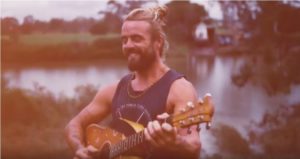 Those who got caught up in the Xavier Rudd mania that hit the Fraser Coast a few weeks ago will enjoy this EXCLUSIVE footage.

Filmmaker, Breannah Mitchell and myself were lucky enough to meet in person the one and only Xavier Rudd before he hit the stage at the Brolga Theatre in Maryborough.

We were serenaded on the banks of the Mary River, as we were snapping photos, videoing, plotting stories and living the moment. Yes it was definitely a few moments in time where you actually pinch yourself  because you can’t believe that this experience is playing out in front of you.

Especially at the end when he gave us both a bear hug, followed by a big kiss on the cheek, while looking at us intensely with his electric blue hypnotic eyes. Definitely a moment that we will never forget…….and this was before the concert had even started!.

*For the full story pick up March’s Edition of What’s On Fraser Coast due out soon.

What’s On Fraser Coast is proud to bring you this short clip courtesy of young filmmaker, Breannah Mitchell.

This footage has been given permission to be used on What’s On Fraser Coast by Xavier Rudd – February 21, 2017