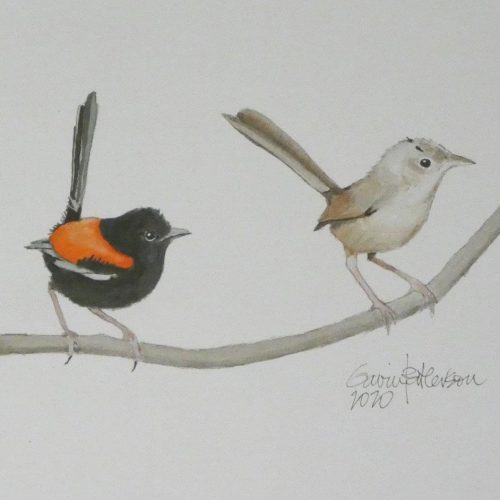 A permanent resident of Point Vernon for nearly forty years, and a regular holiday visitor prior to that, Gavin Patterson has over the last year or so been drawing and painting watercolour sketches of some of the many local birds to be seen in the Fraser Coast region.

His sketches have been based on the photographs of local birds which have been collected by his wife Tess and him over many years of walking along Hervey Bay beaches. The two of them generally walk on one beach or another every morning, sometimes at Point Vernon, sometimes at Scarness/Torquay, and occasionally Dundowran.

These sketches (about 130 in all) are to be exhibited at Gatakers Artspace in Maryborough in December of this year. As well as this, the collection of sketches is to be assembled into a book entitled “A Bird Memoir” which will be launched simultaneously with the opening of the art show.

The book will contain brief stories about the circumstances of their seeing these birds (and other minor irrelevances (in Gavin’s words). He also commented that his little book does not count as any sort of authoritative field guide. It’s a simple record for Tess and Gavin of these beautiful birds, and that is why he has called it a memoir.

Gavin said, “Although many of our local birds are not included in the book, I hope that some of the images and stories might encourage others to have an appreciation of the amazing and gorgeous birds that can give so much pleasure to the lives that we are fortunate to experience in this wonderful part of Australia.”

Incidentally, Gavin Patterson and Co were the architectural firm which designed Gatakers Artspace for council in late 2009 and early 2010. Gavin said that he was pleased to be able to exhibit his sketches in this lovely gallery, of which he has considerable pride.

The exhibition will be open to the public and will run from Saturday, December 5th, 2020 until Saturday, January 16th 2021.

Gatakers Artspace is open from 10am to 2pm every day except Sundays and statutory holidays.