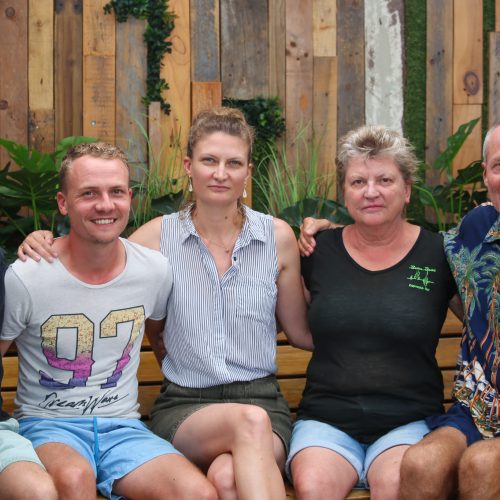 In what has been a tough year for many, Ulf Malmros and his family, wife Tina, and kids, Anna, Oscar, and Karl have forged ahead in life and business while growing in both strength and resilience.

The family took a moment to pause and reminisce about the early days, to reflect on the year that was, and to talk about the importance of giving back.

Born in Sweden in the ‘50s, Tina and Ulf fell in love and in 1979, shortly after tying the knot, the opportunity arose to move to France. The South West Bordeaux area became home, and over the years the Malmros family lived in various parts of France, staying in the country for twenty-eight years.

Ulf says, “Our first trip to France in 1979 gave us that sense of adventure and made us want to travel even more”.

In 2001 the family took a holiday to Australia and were blown away by the country. It was at that point that the family decided to put plans into place to make Australia their new home. This dream came into fruition in 2007, carrying just two suitcases each, and having to leave everything else behind was not easy.

Ulf says, “The whole experience is much harder than you can imagine, you are leaving family, friends, and your culture behind. You also feel alone, which makes you question whether you have made the right decision.

“As a family, we had an agreement that if one of us didn’t like it in Australia, we would all go back. We had our escape plan in place if things didn’t work out”.

The move was hard for the kids too. Karl says, “We lived in the South of France for pretty much all of our lives, so we had many friends that we had to leave behind.

“You can’t replace friends; social media just isn’t the same as physically seeing them. That was the hardest part, having to leave those people behind”.

Tina says, “For me, it was probably easier as where I put my hat is my home. The first three months were the toughest because Ulf had to keep going back to France and the kids got jobs, I was very lonely here, but this was our new home, and I was determined to make the most of it”.

“It was a very tough decision to break up from family and friends. We also found the Australian language hard, as we only had basic English at the time”, added Ulf.

Due to Visa laws at the time, Ulf and Tina were only allowed to work if they bought or established their own business. So, a little Delicatessen called DeliBay was born. This turned out to be a big mistake, Ulf says, “we hadn’t done our homework correctly, as there was no market for that type of business here”.

But that didn’t stop the Malmros family who decided to turn the Delicatessen into a café, and with many twists and turns along the way, the café eventually was renamed BeanBeat. The business grew from strength to strength and became bigger than the family needed. So, after shutting down the little hole in the wall that many people will remember, two shops remained one at Scarness and the other at Seafront. The business was then whittled down even further to make it more manageable, so the Scarness café was sold.

Ulf says, “our primary focus has always been about serving up delicious food and great coffee, but the most important of all to us was maintaining great Customer Service.

“The Seafront location had a facelift and has a lot more potential for us to grow into the future”.

While many businesses were and are still struggling due to COVID, others like BeanBeat flourished.

Those who stayed open did a raging trade. People never give up their coffee.

Tina says, “It may sound strange, but I enjoyed this period, I was there every day helping out at front of house and offering a much-needed service, running in and out with coffee, spending precious moments with people who were feeling isolated”.

Ulf has some very sound advice for those thinking of starting their own business. Don’t rush it, take your time, and do your homework, seek advice from an accountant or a business planner. Do not rely on your own judgement, at the time you are so enthusiastic that you won’t see all of the mistakes that you can make, think it through first.

Over the years, the family have received a lot of help both in Australia and in France, Ulf considers it a privilege to give back to the community whenever he can, as does his family.

Some will remember Ulf when he was volunteering as a committee member with the Hervey Bay Chamber of Commerce, a role he held for three years and was very passionate about.  Always on the lookout for other ways to volunteer within the community, he took his Swedish cast iron 25-kilo pushbike on the Esplanade and decided that he wanted to try to find something to do on the beach. So naturally, he ended up at the Hervey Bay Surf Club where club President Darren Everard convinced Ulf to join.

“Ulf says, “He told me I was going to be a lifesaver, I had no idea at the time what a lifesaver was let alone what they did, but Darren quickly filled me in.

He told me that they save lives, to which I responded, well I can hardly swim”.

The rest is history as Ulf became a fully-fledged member of the Hervey Bay Surf lifesaving Club and has never looked back since. He especially looks forward to Sunday’s where the Nippers learn all about water safety, respect, and camaraderie.

You can also find Ulf most Saturday afternoons volunteering behind the bar at the Hervey Bay Surf Lifesaving Club.

For the city as a whole Ulf says, “We hope that Hervey Bay remains the same place that it is today and that we don’t have too much growth, we want growth, but it needs to be controlled, not like the French Riviera.

Ulf is always looking towards the future and appreciates every opportunity that comes his way. He is also passionate about his family.

With three grandchildren to keep him on his toe’s life couldn’t be any better. Ulf appreciates having his family around him and likes nothing more than to spend time with them.