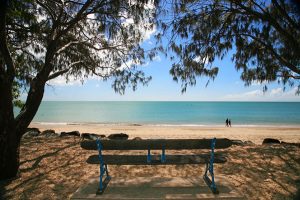 The Esplanade in Hervey Bay (also known as Charlton Esplanade) runs for around 17km along the beachfront from beyond the Urangan Boat Harbour in the south-east to Gatakers Bay in the north-west and along the way, it runs through the ‘Suburbs’ of Urangan, Shelly Beach, Torquay, Scarness, Pialba and Point Vernon.

If you’re a tourist then you’ll spend a lot of time on the Esplanade in Hervey Bay because most of the resorts, caravan parks, motels, cafes and restaurants are found along the town-side of the road. The Esplanade also passes through shopping centres and residential areas too.