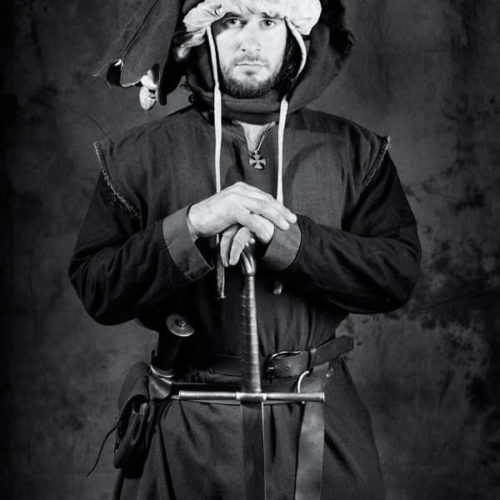 than Richter’s name is becoming well known around the Fraser Coast, although we don’t always get to clearly see his face as he is quite often in full medieval costume. Nathan and his medieval group, ‘Fléau des Français ‘, can often be seen showing off their sword skills at various festivals to everyone’s delight.

Nathan Richter is also an Actor, and recently won an award for Best Actor, through the Australian Screen Industry Network for a short film that he starred in called, ‘Ruby’. This film was with Harlequin Films Australia. The film only took one day to shoot, and was made in 2016. Nathan remembers that he was feeling very unwell on the day of filming, but this actually helped his performance, as he had to act tired and fatigued in the film. Nathan said that he, “was very shocked, surprised, and excited to win Best Actor, certainly not something that happens everyday”.

Nathan has also been lucky enough to act in a few Ads for the Bundaberg Motor Group.. Those of you who go to the movies will have seen him on the big screen, or on television. He has also featured in the Ad for Lifestyle 24 Gym.

Medieval Re-enactment has been a passion of Nathan’s since he was a young teenager of about fifteen or sixteen years of age. he started out by doing some theatrical Rapier with friends, this is basically theatrical sword fighting. Nathan then found a re-enactment group to join, before deciding to start up one of his own called, ‘Fléau des Français’, and as they say the rest is history.

The groups main focus is on the period of the rule of King Edward the third, 1327 to 1377. But they do cater for the 14th Century so any time in the 1300’s is fine. That particular point was chosen because it was a time when there were some pretty major historical events. There was lots of upheaval, the Black Death was happening, and there was a major war between two super powers at the time.

The majority of the costumes and accessories are able to be purchased here in Australia. Some of the members are skilled enough to make their own garments, and bits and pieces. Armour wise you can get the majority of it here. Nathan has made plate armour of the 14th Century style, this is transitional, going from a partial plate to full plates, he has also made various protective garments.

When the weather cools down again the group will be back out at Dayman Park practising for all to watch. In the summer heat they constantly have to worry about heat stroke and dehydration, especially with the armour and all of the clothing that they wear. Nathan will be planning sometime probably in February to start getting back into light training once again. Not full on combat just yet. Just getting back into some drills, and footwork, as they prepare to brush the rust of and begin the new year.

Nathan said, “ We are constantly after more members. Our Trainees recommended age is fourteen or fifteen for mental maturity. All people that are under eighteen years of age must have a parent or guardian with them. I always like to meet them face to face before training starts as well. No gear is needed until much later, other good attributes to have are enthusiasm, and great listening skills as it can be a very dangerous activity”. Please call Nathan Richter on: 0411 3799 21 if you are interested to know more.